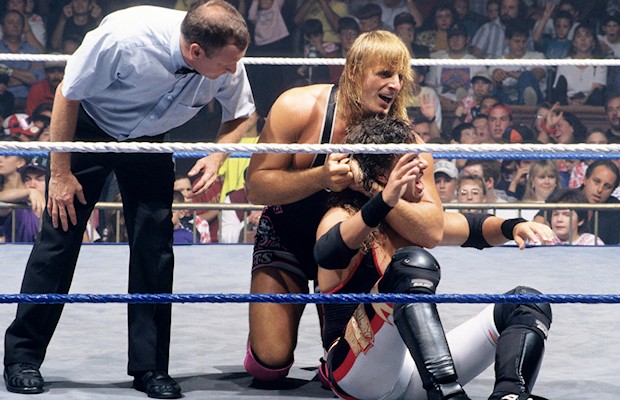 – Below is video from this week’s Talking Smack with Charlotte Flair, Becky Lynch and SmackDown Women’s Champion Naomi talking about their WWE Backlash match against The Welcoming Committee on Sunday. Shane McMahon wonders if they can get along, especially Charlotte and Naomi. Becky says they’re going to win by being a united front and she believes every one is on the same page.

– As noted, it was recently revealed that Charly Caruso and former WWE announcer Sean Mooney will be hosting a three-disc “WWE Unreleased: 1986-1995” DVD on September 4th in the UK and September 5th in the United States. WrestlingDVDNetwork.com reports that there are plans to include a rare Owen Hart match from 1986 and a rare Taz match from 1993, which may be a WWE tryout match. Speculation is that the Owen match is against The Brooklyn Brawler from a July 1986 All Star Wrestling taping in Ontario, while the Taz match is against Scott Taylor at a May 1993 Wrestling Challenge taping in Portland, Maine. WDN also released this new synopsis for the set:

WWE unlocks the vault and brings you never-before-seen matches from 1986-1995. Check out these unreleased hidden gems featuring some of the greatest Superstars in WWE history.

— WWE has gone deep into its vault and uncovered exclusive content that you can only find right here on this set,

– Tommaso Ciampa and Johnny Gargano tweeted the following on how they’re preparing for the Ladder Match against WWE NXT Tag Team Champions The Authors of Pain at Saturday’s “Takeover: Chicago” event:

A Ladder Match you say?