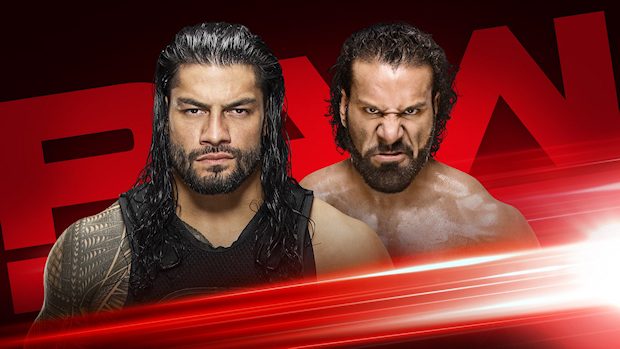 – Roman Reigns has accepted Jinder Mahal’s challenge for a match this Monday on Raw.

Mahal and Elias stole a tag team win from Reigns and Rollins last Monday on Raw. Later in the night, “The Big Dog” got a piece of “The Modern Day Maharaja” in a backstage encounter, and now it appears that fans won’t have to wait until WWE Money in the Bank to see the archrivals square off.

Friday on a WWE.com Exclusive, Mahal challenged Reigns to a match for Monday Night Raw, and the former WWE Champion accepted one day later.

Time has come for The #BigDog to be tamed. This Monday on #Raw. @WWERomanReigns #WWEJackson pic.twitter.com/QuiVIUNkUG

Big words from a scared man. You want to make a challenge? Get ready for the biggest fight of your career. Just another Monday for me. #Raw #MyYard #B2R https://t.co/eefwkUXvCd

WWE then made the match official this afternoon.

#RomanReigns has accepted @jindermahal's challenge for a match THIS MONDAY on #RAW!

– As the lone American in the WWE United Kingdom Championship Tournament, Drew Gulak claims he will show the competition how the classic British style is really done.