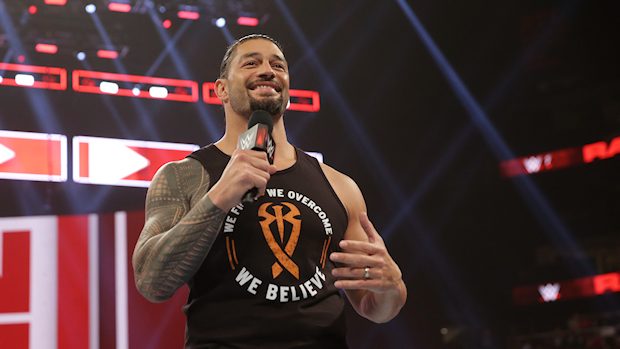 In an emotional address to the WWE Universe, Roman Reigns reveals he is back after his battle with leukemia.

“We didn’t just swing for the fences, we hit a home run.”

While calling back to when he first revealed his diagnosis, Roman Reigns appeared at the start of Raw tonight and announced that his leukemia is officially in remission.

Reigns also announced that “The Big Dog is back.” As he was heading to the back, Seth Rollins’ music hit and they hugged on the stage.

Reigns began and ended his announcement by thanking the fans. He went around ringside, shaking hands with audience members and hugging them. He told the fans he missed them, saying there’s no other job or fan base like this one.

Reigns said he was terrified and insecure when he announced his diagnosis. He didn’t know if he wanted to share that secret with the world. He didn’t know how everyone would react. But by the time he got home, the thoughts and prayers he received were overwhelming. Reigns said it wasn’t just WWE fans, it felt like everyone was showing him love and support. He said with the strength that everyone gave him, he could do anything.

That support gave Reigns a new purpose. Winning titles and climbing the mountain in WWE is still important, but having the ability to step into the ring every single night is what matters most. Reigns said he’s going to use this platform to raise awareness and support those who are in need like he was.

According to Fightful.com, Vince McMahon was the first person in WWE to learn of Reigns being cancer free. The Chairman was told of the news early last week. Reigns made the decision to return not long after learning that his leukemia is officially in remission.