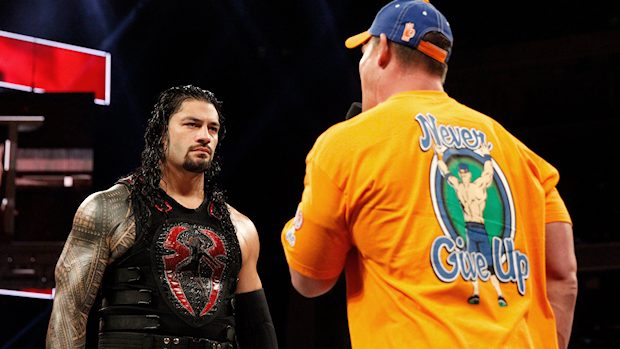 Ahead of his match against John Cena this Sunday at WWE No Mercy, Roman Reigns was interviewed on CBS Sports’ In This Corner podcast. Below are highlights from the interview:

His zipper breaking on Raw and John Cena taking advantage of it:

“The funny thing is, my zipper literally broke like two minutes before I was walking out. Usually, I do a last-minute check. Do I have boogers in my nose? Any like weird hair conditioner on my ears? Is my zipper up? I kind of push and normally you’ll check your zipper to make sure the teeth are right in place. I actually pushed right through it. The actual zipper handle popped off, and once that happens, you have to go out there in two minutes. It’s not like I’m just wearing trunks or something. I’ve got blousing straps at the bottom, and I would have to take everything off in order to get new pants on.

“John being John if anything presents itself, which I feel is fair game if it’s there to take it, and he did. Luckily, that’s one thing of just over the years going back and forth in locker rooms, I have a quick rebuttal with little things like that. It was just something that, thank God I was ready for it, but really he shocked me in bringing up. I thought I had it closed up the whole time but apparently not. I was peaking at him, I guess.”

His relationship with Cena:

“I’ll be completely honest: Me and John have always been cordial, but I would not say we are close friends by any means. There is a business respect, but I think that’s what makes this so special that we’re truly competing against each other and I think people see that. But it’s not like a situation where I’m taking anything he says to heart because I don’t really care what he thinks about me. If you care for someone and they knife you, it’s going to hurt. It will hurt your feelings and can depress you. But when you don’t really care about somebody or their opinion, it doesn’t affect you. And that’s how it is with me and John.”

Improving his promo ability during his feud with Cena:

“It was nice to be able to change gears and get better at something. I think I’ve definitely gotten better on the stick working with John. I have to give him credit for that. Like he said in one of his opening promos, you either step up or you step aside.”

You can listen to the full interview here or read the story at this link.