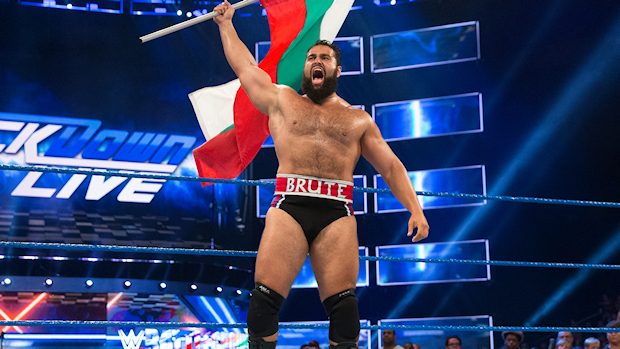 On Wednesday, WWE announced Rusev would be wrestling The Undertaker in a Casket Match at the Greatest Royal Rumble event on April 27 in Saudi Arabia. This was quite the surprise for a number of reasons, not least of which the fact that Undertaker had just beat John Cena in under three minutes at WrestleMania 34 while Rusev lost his bid to win the United States Champion in a Fatal 4-Way Match.

The “Bulgarian Brute”’s response to this was both to outright tell “The Deadman” to “bury me softly, brother” and give an interview to TMZ alongside his wife, Lana, that seemed to upset ‘Taker’s wife, Michelle McCool.

Had to listen to see if “crush his old a$$” was ACTUALLY said! Guess some people are smarter than others…😎🙄🖤 https://t.co/avOLWKORV8

In the case of the TMZ interview, neither Rusev or Lana said “crush his old a$$” in regards to The Undertaker.

After all this, WWE announced that Rusev was out of the match and replaced by Chris Jericho. WWE’s explanation for the change is that Lana refuses to allow Rusev to compete in a Casket Match.

All over the world, little boys and girls are celebrating #RusevDay, they smile for the greatest Superstar ever ! I’ve already spoke with @WWE officials to change that match because I REFUSE to let my husband @RusevBUL compete in a Casket Match at #WWEGRR! Happy #RusevDay

Rusev then scrubbed WWE off his Twitter account, which has fans speculating that his time with the company is coming to an end.

Life is life….. it will be #RusevDay somewhere

Jimmy Traina of Sports Illustrated asked WWE if Rusev and they said the rumors are not true. He will compete in the 50-Man Greatest Royal Rumble Match.

Wrestling fans, I asked the WWE if Rusev has left the company. WWE said those rumors are not true, he is still with the company and he will be in the Royal Rumble match at Greatest Royal Rumble in Saudi Arabia. #RusevDay

Dave Meltzer of F4WOnline added on Friday that “all the Rusev stuff is storyline.”