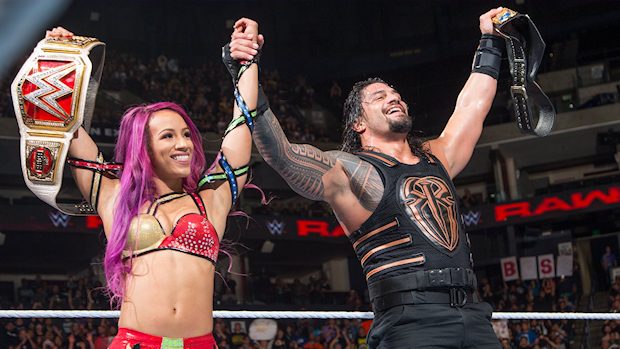 — Roman Reigns shocked the world in October when he relinquished the Universal Championship as he emotional announced he had been diagnosed with leukemia for a second time.

Apart from an appearance at a Georgia Tech football game and a low-key visit to WWE’s Tribute to the Troops show, “The Big Dog” has stayed away from the spotlight during his health fight.

As you would imagine, Reigns’ peers miss him being around. WWE is holding a live event tonight at Madison Square Garden and Sasha Banks got emotional after seeing a chair with his image alongside hers. “The Boss” snapped a shot of the chair, posted it on Instagram and wrote, “I miss Roman.”

Reigns spotted last Friday in Greenville, South Carolina as he snapped a photo with a police officer.

— Lana went above and beyond when it came to shopping for her father for Christmas. Fulfilling a long-term goal, Lana tweeted Tuesday she bought him a new car.

Lana also got to celebrate Rusev defeating Shinsuke Nakamura for the United States Championship on SmackDown LIVE. WWE taped the episode on December 18, but it aired on Christmas Day, which also happens to be Rusev’s 33rd birthday. His big win ranks at No. 1 in the top 10 moments from last night’s show.