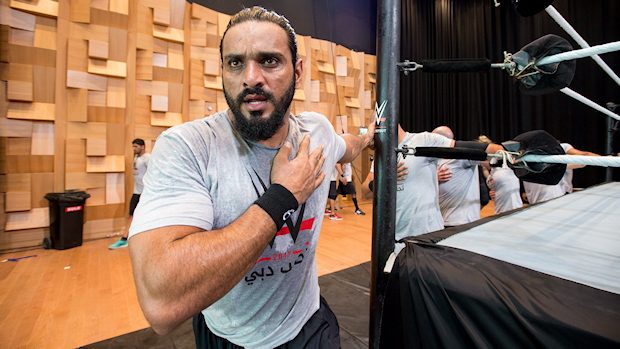 Saurav Gurjar has already achieved great success, both as a television star in Bollywood and as an athlete. The 32-year-old Gwalior, India native is now ready to fulfill his dream of becoming a WWE Superstar.

On Saturday night, Gurjar made his NXT in-ring debut at a live event in Fort Pierce, Florida.

Looks like #nxtftpierce is having their annual Jobber Royal pic.twitter.com/6DnMuDbpEh

Gurjar, who according to WWE.com, is 6-foot-8 and 298 pounds, joined 33 male and female athletes from 18 countries in a four-day invitation-only tryout in Dubai in April 2017. There, he impressed WWE Performance Center coaches and trainers and earned himself a WWE developmental contract.

“I don’t want money. I don’t want fame,” Gurjar told WWE.com at the tryout. “I want my dream.”

Gurjar reported to the WWE Performance Center in January along with Shadia Bseiso of Jordan, Nasser Alruwayeh of Kuwait and fellow Indian Rinku Singh. Singh competed in the 15-Man Battle Royal after making his in-ring debut two nights earlier.

A former national champion in kickboxing with a diverse background playing sports throughout college, including wrestling, basketball, and boxing, Gurjar is a well-known fixture on Indian television, having starred in popular mythological dramas such as Mahabharat and Sankat Mochan Mahabali Hanuman.

Gurjar also has some professional wrestling experience as in January 2012, he took part in Ring Ka King, a television-based promotion in India that was backed by Total Nonstop Action Wrestling. He wrestled three matches under the ring name Deadly Danda. He partnered with Abyss, Magnus, Scott Steiner, and Sonjay Dutt in two matches against Matt Morgan and Chavo Guerrero, Jr., among others. He also faced luchador Puma in one singles match.

On joining WWE, Gurjar told The Times of India, “It had been a dream of mine since childhood to be a WWE wrestler. I am from the Chambal valley, where kids usually have two options — to join politics or the sand mafia. But I always wanted to be a professional wrestler. Everything that happened in between — sports, acting — was by chance.”

Gurjar mentioned he was a die-hard WWE fan growing up and would try to emulate the moves of The Undertaker and Kane.

“My father is a farmer and we didn’t have a TV growing up so I would watch wrestling fights at my neighbor’s place. I grew up watching people like The Undertaker, Kane, and The Rock,” Gurjar said. “Kane was someone I idolized and I can’t wait to meet him. Although I’m sure if he walks up to me in the ring, I would be too stunned to say or do anything.”

While it will be some time before he even starts wrestling regularly, Gurjar has his sights set on WWE’s biggest prize.

“My goal is simple — I want to be the WWE Heavyweight Champion. It might take time but I will get there eventually,” Gurjar declared.