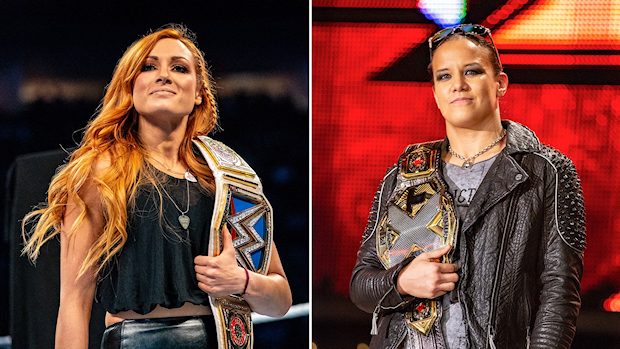 By now, it’s clear that no one is safe from SmackDown Women’s Champion Becky Lynch’s devastating Twitter takedowns, but that doesn’t mean everyone’s afraid of punching back at “The Man,” either.

In a back-and-forth with Ronda Rousey last week, Lynch invoked NXT Women’s Champion Shayna Baszler’s name while accusing “The Baddest Woman in the World”‘s tweets of being ghostwritten. Rousey and Baszler are longtime friends, training partners and Four Horsewomen cohorts dating back to their days in MMA.

Dr Jail? Looks like Dr paid vacation where you get to sit on your ass extending your title reign while trying to think of witty tweets in an attempt to stay relevant. Bet your jokes mocking @EdgeRatedR aren’t so funny now, huh? Try not to bump your nose getting out of that thing

I’ve never seen a judo ‘master’ get so easily thrown, Ronnie. I’m convinced you let one of your turkeys at the ranch peck these replies out. Which one of them wrote this one, Shayna? https://t.co/i4IdOP8ESh

Never one to shy away from trash talk, “The Queen of Spades” issued a biting reply that shined a light on her second reign with the NXT Women’s Title — a championship that Lynch never managed to win during her time in NXT.

Don’t try to name drop me in this attention grab, I’m too busy holding down the division you couldn’t. #ShaynaTwoTime https://t.co/DZ0q6HvExk

Lynch fired back at Baszler on Monday with the following:

The only thing that bonds you, Ronnie & I wanna say Mary & Jessica? is you all ran from another sport that beat you. So make no mistake, if I chose to ‘drop’ anything it will be you, not your name. BTW, give my best to your leader & her hurty mouth. I’m stronger everyday, is she? https://t.co/WOmW7loYhT

Baszler fired back at Lynch today with the following:

I never ran. I got sick of seeing you river dance and decided to come change pro wrestling. You don’t learn to drop people by BEING dropped, homie. Besides, you’ve got bigger sharks to worry about. I don’t care about you, move along. https://t.co/BUVUzUXdDV