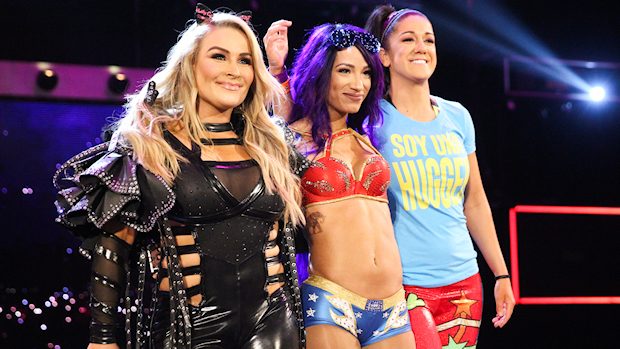 WWE has announced that Sasha Banks, Bayley, and Natalya will face The Riott Squad in a Six-Woman Tag Team Match this Sunday at WWE Evolution.

“After weeks of building tension and animosity, The Riott Squad will attempt to forcefully take the torch of the Women’s Evolution from those who pioneered it when they collide with Sasha Banks, Bayley & Natalya in six-woman tag team action at WWE Evolution.

“The Riott Squad have caused ample amounts of havoc since landing on the red brand earlier this year via the Superstar Shake-up. Ruby Riott, Liv Morgan and Sarah Logan have been fearless, stepping to anyone and everyone on Team Red, including former champions such as Banks, Bayley and Natalya. The Riott Squad have focused their efforts on Bayley and Natalya in recent weeks, using strength in numbers to lay some savage beatdowns on their rivals and even dragging Natalya onto the Raw stage to send a message to Ronda Rousey. However, the game changed when The Boss returned to Raw to even the odds and finally set the stage for a fair fight.

“Now, at WWE Evolution, where the past, present and future will converge, these two squads will battle for Team Red supremacy. Will The Riott Squad elevate to new heights by toppling three former titleholders who have played a vital role in the Women’s Evolution? Or, will the mainstays hold their ground and pick up a monumental victory at the historic event?”