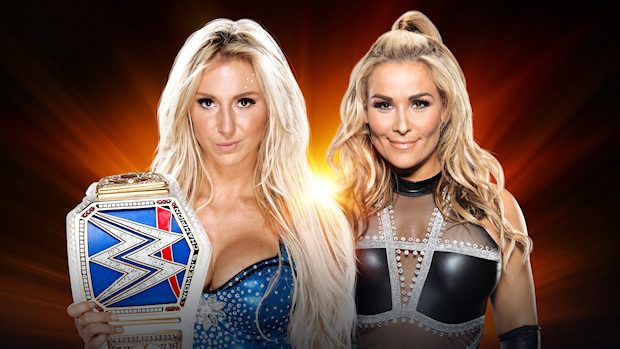 SmackDown LIVE’s title pictures were shaken to their core on Friday night when several major matches were announced for Team Blue’s upcoming WWE Clash of Champions on WWE Network.

After their previous rematch was interrupted by The Riott Squad, Natalya will be challenging for Charlotte Flair’s SmackDown Women’s Championship at the show. Charlotte won the title from Natalya on an episode of SmackDown last month, which featured Ric Flair making his first appearance on WWE television since his health scare and celebrating with Charlotte.

To further set up their rematch, Natalya bailed on Charlotte and Naomi when they were facing Ruby Riott, Liv Morgan, and Sarah Logan last Tuesday.

The United States Championship will be on the line in a Triple Threat Match at Clash of Champions as Baron Corbin defends against Bobby Roode and Dolph Ziggler. There was an angle on Tuesday where Roode (who has been feuding with Ziggler for much of his main roster run) challenged Corbin to a title match after they had brawled the week before, but Corbin wouldn’t accept.

There will be three teams in the tag title match at the pay-per-view as well, with The Usos taking on New Day and Shelton Benjamin & Chad Gable.

All of the Superstars took to social media to give fans some insight on their title clashes.

The #Usos just heard the big announcement that they will be in a triple threat at #ClashofChampions. #WWEClash #WWEMexicoCity

It looks like The #NewDay are ready for their title opportunity at #WWEClash, but someone should probably tell @wwegable & @sheltyb803! #WWEMexicoCity

After her match at #WWEMerida, @charlottewwe had a message @natbynature. They meet at #WWEClash with the title on the line!

Coming to @WWE all I wanted was opportunity… My biggest opportunity yet lies ahead at #ClashofChampions @BaronCorbinWWE @HEELZiggler #UnitedStatesTitle is one of the most prestigious in our business. Now.. it is going to become Absolutely #Glorious

Roode/Corbin,
Don’t know why,
don’t care!
they say you can’t take it with you, we’ll just see about that…
🇺🇸😎💰@wwe #ClashofChampions

Clash of Champions is WWE’s last pay-per-view of the year and will take place at the TD Garden in Boston, Massachusetts on December 17. AJ Styles defending his WWE Championship against Jinder Mahal is also scheduled for the show.