Home / Information / Something You Need To Know About Nikki Bella

Something You Need To Know About Nikki Bella 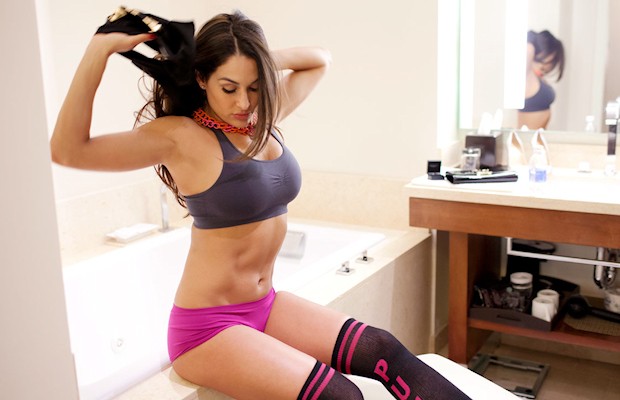 Playboy announced in October 2015 that beginning with the March 2016 issue, the publication would no longer feature full frontal nudity. With this change, that means fans could potentially see the return of WWE’s female Superstars to the publication.

For years, WWE fans saw a Diva grace the cover of the famed magazine as part of the hype for WrestleMania. But when WWE committed to presenting family-friendly, TV-PG content and storylines in 2008, it was no longer right for the women to appear naked in the publication.

That could all change with the revamped Playboy solely featuring photos of women wearing clothes. As a means of publicity, it would make sense for WWE to join forces with the magazine once again. There’s a whole range of WWE female stars who could take part in a pictorial for Playboy, including The Bella Twins.

Nikki Bella and her sister Brie would certainly be favorites for a WWE-themed Playboy pictorial. They are two of the most prominent female characters in WWE, not to mention the top stars of Total Divas on E!. They’re also hot as hell, and everyone knows Playboy loves twins.

Nikki and Brie are WWE’s go-to girls for publicity, which is why they would be top candidates for Playboy. They say the right things and are great at promoting the WWE brand. There is also the fact that Nikki dates WWE’s top Superstar, John Cena, and Playboy would almost surely want to ask her about their sex life.

2015 saw Nikki emerge as one of WWE’s top performers and become the longest-reigning Divas Champion in history. She’s as big of a star as any of the women on the WWE roster, so a pictorial in Playboy would be possible. But until that day comes, fans will have to settle for hot Instagram photos of Nikki. Now that doesn’t mean there aren’t any real naked photos of Nikki online.

On Raw on July 21, 2014, Brie, whose character had recently quit WWE, appeared in the audience as a fan to show her support for Nikki. Brie, however, couldn’t help herself and argued her way into a physical confrontation with Stephanie McMahon that saw her slapped and banned from ringside.

As hot as the confrontation came across on TV, it was quickly overshadowed by the fact that Nikki, who wrestled Eva Marie, Rosa Mendes, Alicia Fox and Cameron in a 4-on-1 Handicap Match minutes later, had a wardrobe malfunction!

After being thrown out of the ring by her opposition, Nikki was lying in pain on the floor. While struggling to regain her composure, disaster struck.

Her red top momentarily slipped below her bountiful cleavage.

Though Nikki’s wardrobe malfunction was a blink-and-you-miss-it moment, it quickly went viral after photos surfaced online. Since then, millions of fans have gotten a glimpse of her humiliating moment.

This wasn’t the first time where a Bella Twin suffered a wardrobe malfunction during a live episode of Raw. In fact, it was almost one year to the day that Brie suffered a nip slip during an in-ring segment with her Total Divas co-stars. The incident was enough to prompt an apology from Brie on Twitter and vow that it would never happen again.

Since the two-time Divas Champion has never posed in her birthday suit before, you are probably wondering whether more naked photos and videos of Nikki have surfaced online.

On August 31, 2014, almost 500 private pictures of various celebrities, mostly women, and with much containing nudity, were systematically stolen and uploaded online. This massive breach of privacy, which is known as “The Fappening,” involved some of the biggest celebrities around, most notably actress Jennifer Lawrence. So was Nikki Bella a victim of most significant celebrity nude scandal in the history of mankind?

While it seems highly possible that nude photos of Nikki would leak online since she often posts revealing selfie shots of herself on Instagram, it hasn’t happened … yet.