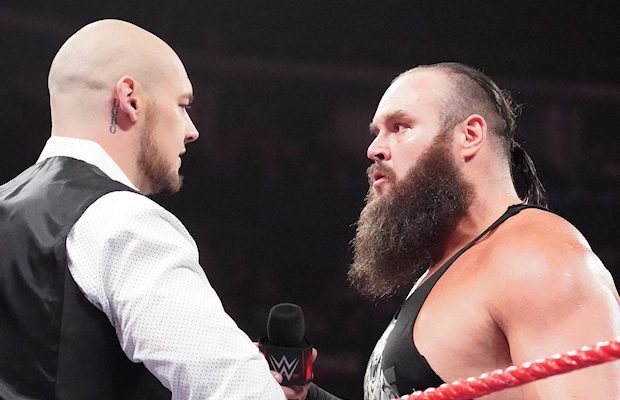 Per their agreement, Strowman would receive a match against Acting Raw General Manager Baron Corbin where he could pick the stipulation and “The Lone Wolf” signed a waiver absolving Strowman of the damage. After that, he gets a rematch with Brock Lesnar for the Universal Championship, which Corbin had cost Strowman at WWE Crown Jewel. In order for him to get those matches, however, Strowman has to help Raw defeat SmackDown LIVE at Survivor Series and not attack Corbin until after the event.

Tonight at Survivor Series, it will be re-iterated that Strowman is not to touch Corbin until after the show if he wants a rematch against Brock Lesnar and a match against Corbin. According to Rajah.com, Strowman will get around “laying a hand on Corbin” by hurling either Dolph Ziggler or Lio Rush at him during a backstage interview.

It’s no secret that WWE is looking for a top babyface now that Roman Reigns is on hiatus due to an ongoing battle with leukemia. If the plan is to coronate a new top babyface at WrestleMania 35, then it doesn’t look like Strowman will be the guy.

On the post-Raw edition of Wrestling Observer Radio, Dave Meltzer said that Strowman will not face Lesnar at WrestleMania.

“This is subject to change but I was told directly that Braun Strowman and Brock Lesnar is not gonna happen at WrestleMania so that could mean Strowman wins the championship before WrestleMania. It could mean a lot of different things,” Meltzer said.

Meltzer also noted that Lesnar is not scheduled for next month’s TLC pay-per-view in San Jose, California so it looks like his next Universal Championship Match will take place at the Royal Rumble on January 27, 2019.

“Right now Lesnar is not booked in San Jose, which would be the December pay-per-view, so the one after that is the January pay-per-view, which is the Royal Rumble. That is what it feels like to me and from there, who knows.”