The Backstage Reason On Why Natalya No Longer Supports Ronda Rousey On Raw - PWPIX.net 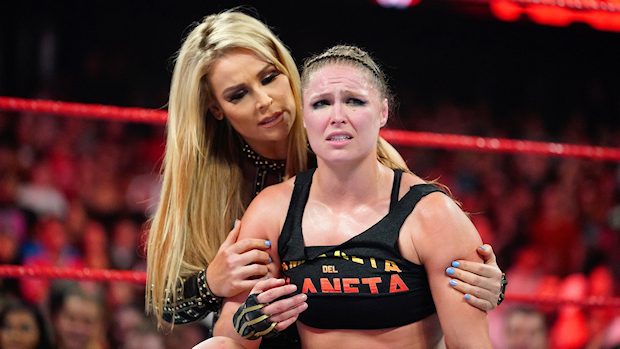 Nia Jax will challenge Ronda Rousey for the Raw Women’s Championship at WWE TLC, but that wasn’t WWE’s original plan.

WWE decided to have Rousey and Jax face off on pay-per-view for the second time this year after dropping their plans for Rousey to feud with Natalya.

According to Dave Meltzer in the latest issue of the Wrestling Observer Newsletter, WWE planned on having Natalya turn on Rousey at around this time, which would have led to a match at TLC. When Natalya’s father, Jim “The Anvil” Neidhart, passed away in August, WWE dropped the idea because of the feeling that they couldn’t turn her heel anymore. A few weeks later, their on-screen relationship was quietly dropped.

Meltzer wrote, “The Rousey/Natalya friendship thing has been dropped for weeks. The plan was always for Natalya to turn on Rousey right about now. When Jim Neidhart passed away, the idea was dropped because of the feeling that they couldn’t turn her heel anymore and went back to Nia Jax, who Rousey had already beaten for the PPV opponent. So they also pulled her away from Rousey. Turning her within a few weeks of her father’s passing away wouldn’t have been the right timing, but really that was only a short window.”

Natalya continued to support Rousey until October, at which point they went their separate ways. They were last seen together on the October 8 episode of Raw as Natalya helped Rousey leave the ring after being attacked by surprise by The Bella Twins.

On October 15, Natalya entered a feud with The Riott Squad after her locker room got vandalized by the mischievous trio. On November 5, Ruby Riott destroyed a pair of sunglasses belonging to Natalya’s late father. The ensuing grudge grew so heated that Riott and Natalya got into a brawl during the Survivor Series Kickoff and got kicked off the Raw Women’s Survivor Series team. On Raw last week, “The Queen of Harts” finally got her revenge by beating Riott in a one-on-one match.

Rousey and Jax’s first match took place in June at Money in the Bank, but it ended in controversy. Alexa Bliss, who had won the Money in the Bank contract less than two hours prior, bashed Rousey in the back with the briefcase. As a result, Rousey earned a disqualification victory over Jax, who was Raw Women’s Champion at the time. Jax earned her title match at TLC by winning a Women’s Battle Royal at WWE Evolution.