The Honky Tonk Man Reacts To Finally Going Into The WWE Hall of Fame - PWPIX.net 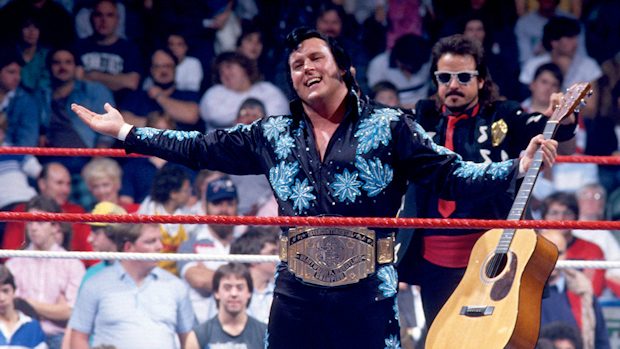 The Honky Tonk Man, the longest-reigning Intercontinental Champion in WWE history, is the latest inductee in the WWE Hall of Fame Class of 2019.

The news was first reported on Tuesday by CBS Sports and confirmed by WWE. The Honky Tonk Man joins D-Generation X — Triple H, Shawn Michaels, Road Dogg, Billy Gunn, X-Pac, and the late Chyna — in the WWE Hall of Fame Class of 2019.

While The Honky Tonk Man — real name Wayne Farris — has a made few appearances on WWE television over the last two decades — and has not always seen eye to eye with the company along the way, he believes the timing was right for him to get inducted after initially turning down an offer in 2010.

“WWE is the place to be. For me, it’s the only place I have ever wanted to be,” The Honky Tonk Man told CBS Sports’ State of Combat podcast.

“It’s the place that if I’m ready to finish up, that’s where I want to be. It’s home for me because I have so many fond memories of everything that has been accomplished by WWE and from what I’ve accomplished myself. It wasn’t me alone, it was a huge team effort.

“That is what’s amazing and what is so great about being part of the WWE. The door is open to you and it’s up to you if you want to walk through it. I look back on everything and for some unknown reason, everything has a meaning. The timing, everything about this year in the 2019 Hall of Fame, everything was lining up perfectly. I never dreamed it was going to happen and would tell people that it’s something I don’t think about every day of my life. But to be able to be part of this, it’s hard to explain.”

The 2019 WWE Hall of Fame Induction Ceremony takes place on Saturday, April 6 at the Barclays Center in Brooklyn, New York.

The Honky Tonk Man was reported as a potential inductee along with five other names.