The Revival Appear At NXT House Show and Sasha Banks Wants To Come Next Time - PWPIX.net 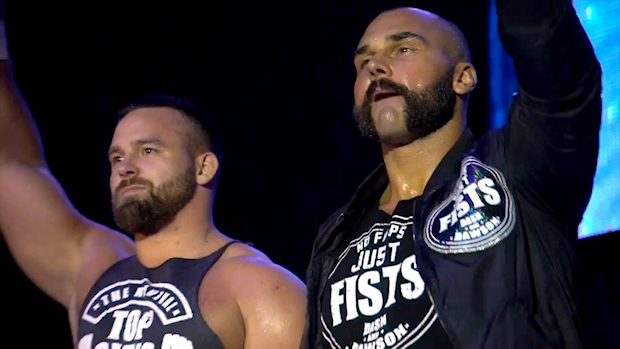 With Scott Dawson and Dash Wilder back in the United States following WWE’s ongoing European tour, The Revival made a surprise appearance at last night’s NXT house show in Oklahoma City, Oklahoma.

The two-time NXT Tag Team Champions interrupted the current title holders when Undisputed ERA’s Kyle O’Reilly and Roderick Strong called out the locker room and claimed to be the top guys in WWE. Dawson and Wilder then unsuccessfully challenged O’Reilly and Strong for the NXT Championship.

O'Reilly and Strong call themselves the Top Guys in WWE, bringing out… #NXTOKC #ForeverTheRevival pic.twitter.com/ubgVVxpANd

BREAKING: The only two-time NXT Tag Team Champions The Revival have shown up at #NXTOKC to challenge Kyle O’Reilly and Roderick Strong of the Undisputed Era! #WhoGotFridays #NeXTPod (photo from good brother @RealRepass) pic.twitter.com/tKb75VaQhL

It seems that Sasha Banks would like to return to NXT as she responded to the clip with the following.

Can I come next time

Dawson and Wilder both responded, “Come on, sis.”