“Miz TV” With The New Day Set For SmackDown Live 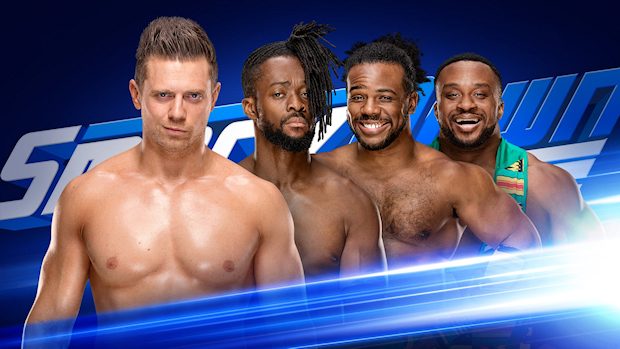 All of the participants in the Men’s Money in the Bank Ladder Match should be known following this Tuesday’s episode of SmackDown LIVE.

One of the two remaining spots will go to a member of The New Day after Big E and Xavier Woods beat Cesaro and Sheamus in a Money in the Bank Qualifying Match. “The A-Lister” invited The New Day to join him on “Miz TV” this Tuesday on a video posted to Twitter Friday afternoon, where he promised to get the exclusive on which New Day member will try and climb to new heights.

3 Members of The New Day, but only 1 enters #MITB. This Tuesday on #SDLive, find out on #MizTV which member will be joining MY match pic.twitter.com/5tE5K3iVSO

WWE cameras caught up with the four-time tag team champions shortly after. Big E, Kingston, and Woods accused The Miz of being a “wedge-driver” by trying to get between their bond of friendship while explaining that they like the air of mystery surrounding their participation in Money in the Bank. They also feel that if one of them becomes “Mr. Money in the Bank,” they all do.

The Miz is among the WWE Superstars slated for the Men’s Money in the Bank Ladder Match and was on commentary for Big E and Woods vs. Cesaro and Sheamus, where he pushed the idea that each member of The New Day is holding each other back because they’ve accomplished everything they can as a team.

Two qualifying matches are also set for SmackDown LIVE. Samoa Joe will face Big Cass to determine the final competitor in the men’s match, and Lana will take on Billie Kay in a women’s qualifier.

The New Day member and Joe vs. Cass winner will join Braun Strowman, Finn Balor, Miz, Rusev, Bobby Roode, and Kevin Owens at Money in the Bank. Ember Moon, Charlotte Flair, Alexa Bliss, and Becky Lynch have qualified on the women’s side.

Tuesday’s show is taking place at the DCU Center in Worcester, Massachusetts as the SmackDown LIVE crew returns from their European tour.