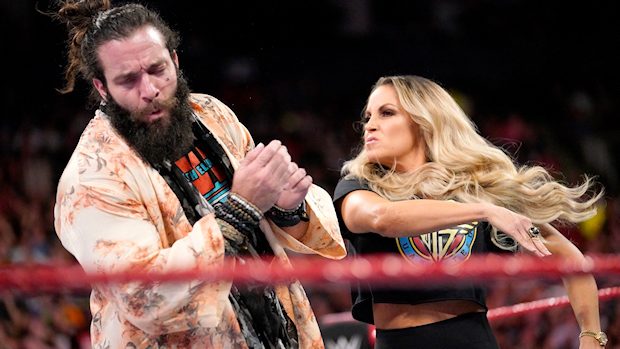 After hurling insults last week in Brooklyn, New York, Elias incurred the wrath of “The Prince of Queens” Curt Hawkins, who he shut down. Elias wasn’t so lucky this week when he insulted Toronto, compelling WWE Hall of Famer Trish Stratus to defend the Six’s honor … and put Elias in his place.

After interrupting Elias, the former Women’s Champion fired back with a few jabs of her own before reminding fans that she’s due to return to the ring at WWE Evolution to face Alexa Bliss. An oblivious Elias claimed the real reason Trish interrupted him was that she wanted to “Walk with Elias.” But his final insult — “I don’t date women in their 60s” — was enough to finally earn him a slap in the face that left the guitarist spinning.

Stratus stayed in the ring ahead of the next match, with Raw Women’s Champion Ronda Rousey accompanying Natalya and Bliss appearing with Alicia Fox. Bliss cut a promo on Stratus, calling her irrelevant and saying that she replaced her. She said nothing can save Stratus from the beatdown she’s going to get at WWE Evolution.

Bliss brought out Stratus’ old rival Mickie James, but Bliss and James backed away from Rousey and Stratus at ringside during the match. Natalya, Rousey, and Stratus celebrated after Natalya forced Fox to submit to the Sharpshooter.

Stratus’ return was not only a surprise to fans, but to most people in WWE as well. The script for Raw did not have her listed as appearing. The only thing noted was that Elias’ performance would get interrupted and that it would take place before the main event. Furthermore, Trish was hidden somewhere in the Scotiabank Arena until she made her appearance on Raw.

She also posted the following on social media.