Nia Jax To Face Ronda Rousey At WWE Money in the Bank | PWPIX.net 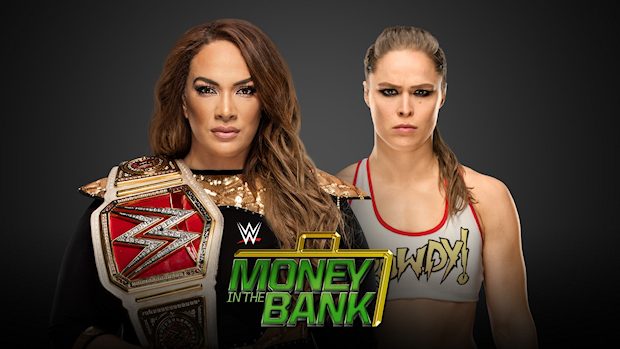 Nia Jax shockingly named Ronda Rousey as her next challenger for the Raw Women’s Championship on Monday morning at the NBCUniversal Upfront in New York City’s Radio City Music Hall.

“The Irresistible Force” revealed she wants to put her title on the line against Rousey at WWE Money in the Bank, much to the surprise of “The Baddest Woman on the Planet.” Never one to back down from either a challenge or an opportunity, a bewildered Rousey agreed to the match.

This will be Rousey’s first title opportunity since joining WWE in January. When we last saw her compete on television, she teamed with Raw General Manager Kurt Angle to defeat Stephanie McMahon and Triple H in a Mixed Tag Team Match at WrestleMania 34.

There are some rumors floating around on why WWE booked Rousey in a title match against Jax at WWE Money in the Bank. The Twitter account @WrestleVotes, which has broken some WWE stories in the last few months, asked a source in WWE why the match is happening at Money in the Bank and not SummerSlam. The person behind the account was told, “If they are true, it’s because they can’t ignore Rousey for another PPV, don’t want her in the ladder match, & can’t have her lose a qualifying match so they had no choice.”

Asked about the Ronda Rousey v Nia Jax rumors happening at MITB & not SummerSlam… Was told, “if they are true, it’s because they can’t ignore Rousey for another PPV, don’t want her in the ladder match, & can’t have her lose a qualifying match so they had no choice.”

The idea for this feud apparently only came about a week ago. According to John Pollock of POST Wrestling, who reported Sunday night that Rousey would be wrestling at Money in the Bank, the idea to go with Rousey vs. Jax was made around the time of Backlash. Furthermore, both were originally scheduled for other programs on Raw.

Rousey hasn’t wrestled since teaming with Kurt Angle to defeat Stephanie McMahon and Triple H at WrestleMania 34, but she’ll be taking part in house show matches on WWE’s European tour this week. She is advertised to wrestle on Wednesday in Geneva, Switzerland, Thursday in Vienna, Austria, Friday in Turin, Italy, and Saturday in Paris, France. Her opponent on at least one of the events will be Mickie James, who she’s advertised to face in Paris.

Related ItemsMoney in the Bank NewsNia Jax NewsRonda Rousey News
← Previous Story Nikki Bella Reacts To John Cena Saying He Wants To “Be The Father Of Her Children” (Video)
Next Story → Possible Stipulation For Shinsuke Nakamura vs. AJ Styles WWE Title Match At Money in the Bank