WWE Changes Plans For NXT TakeOver: Chicago Match Due To Money in the Bank Stipulation - PWPIX.net

WWE Changes Plans For NXT TakeOver: Chicago Match Due To Money in the Bank Stipulation 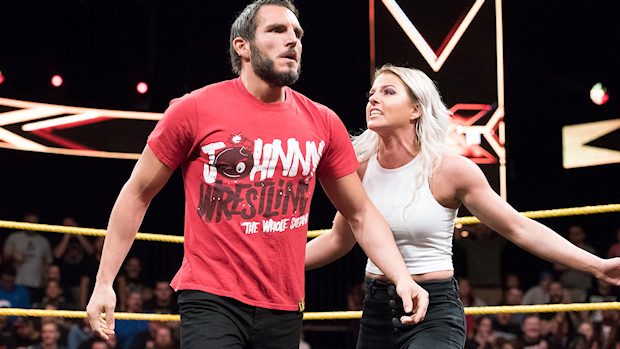 Against the wishes of his wife Candice LeRae, Johnny Gargano ripped off his neck brace and challenged Tommaso Ciampa to a fight on this week’s episode of WWE NXT. Gargano lunged toward Ciampa in the ring but was immediately knocked off the apron by him. Gargano flew backward and collided with LeRae, causing her to hit hard on the steel entrance ramp.

In this video posted today by WWE, LeRae declares she’s “done with this” as cameras catch Gargano opening a match contract for a Street Fight against Tommaso Ciampa at TakeOver: Chicago.

This angle will ultimately lead to Gargano and Ciampa facing off at TakeOver: Chicago on June 16 at the Allstate Arena in Rosemont, Illinois. Dave Meltzer noted in the latest issue of the Wrestling Observer Newsletter that he heard several weeks ago that at one point the idea for Gargano vs. Ciampa was talked about as a Last Man Standing Match. This was changed because AJ Styles will be defending the WWE Championship against Shinsuke Nakamura at WWE Money in the Bank.

Following his victory over Styles last week, Nakamura earned the right to decide the stipulation for his title bout against “The Phenomenal One” at WWE Money in the Bank. After beating up Styles on this week’s episode of SmackDown LIVE, Nakamura announced that they will face off in a Last Man Standing Match for the WWE Championship.