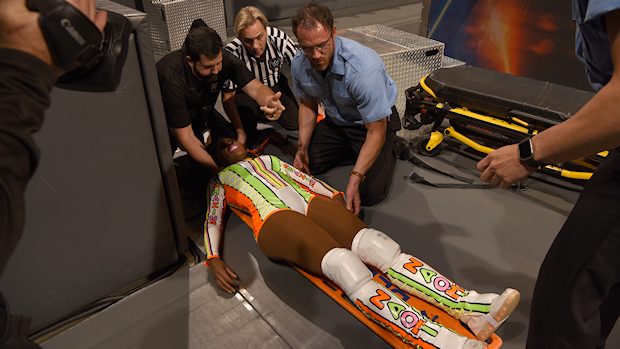 Naomi suffered multiple injuries after an attack by The Riott Squad last night on SmackDown LIVE.

As reported by Cathy Kelley in the following video, Naomi sustained a separated shoulder, cervical strain and facial contusions at the hands of Ruby Riott, Liv Morgan and Sarah Logan.

The injuries occurred in the midst of a Six-Woman Tag Team match pitting Naomi, Charlotte Flair, and Natalya against Riott, Morgan and Logan.

Natalya left during the match, while The Riott Squad incapacitated Naomi when Logan sling-shotted her face into the steel steps.

That left Charlotte to fend for herself and resulted in The Riott Squad picking up an impressive victory.

The Riott Squad made their debut on SmackDown LIVE last week by attacking Becky Lynch backstage and interrupting a SmackDown Women’s Championship Match between Charlotte and Nattie.

Naomi’s injuries appear to be storyline related rather than legitimate, but WWE reporting them goes a long way toward adding legitimacy and credibility to The Riott Squad.