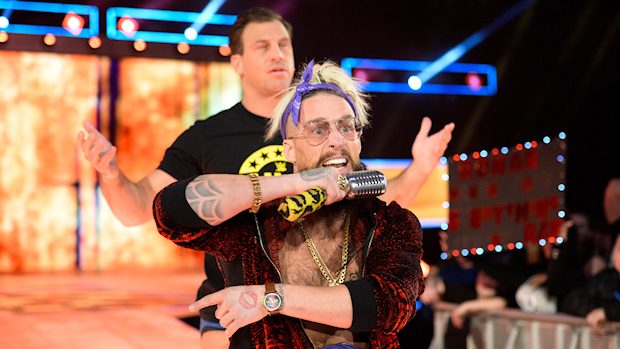 According to a report this afternoon by Ryan Satin of Pro Wrestling Sheet, Amore — real name Eric Arndt — is being investigated by police in Arizona for allegedly raping a woman last year inside a hotel room.

“WWE has zero tolerance for matters involving sexual harassment or sexual assault,” a WWE rep said in a statement to Satin. Until this matter is resolved, Eric Arndt (aka Enzo Amore) has been suspended.”

WWE also issued the statement to ESPN and various other news outlets.

The woman — who didn’t want to be named — came forward with her story on Twitter today and shared graphic details of the alleged assault that she claims took place last October.

She wrote, “OKAY..it’s been long enough & I have been so so scared to share this. I was raped in mid October by the WWE Enzo Amore (also known as Eric Arden) & Tyler Grosso & TOOPOOR let it happen as accomplices. I was in a mental hospital for 45 days after it. They ARE NOT good people.”

The women then shared additional details, which can be read in full below:

The original question TOOPOOR asked me was if I would suck Enzo’s dick. I said possibly but if I wasn’t down she said we could all just hang out. Then they got me way fucked up & they left knowing what was about to happen. When Enzo the WWE guy stared coming on to me I was passed out on the couch. I said “I want to get to know you first before doing anything.” He replied, “Bitch I have 1million followers on instagram…you should be begging for this dick.” & then he restrained me & it happened. I never would be this dramatic about something like this but I want you all to know that I would’ve left if I could. I was in psychosis- I had no idea what was going on. I remember bits &pieces & I have constant flashbacks..My mental issues have been the worst ever & i suffer from major PTSD from it.

OKAY..it’s been long enough & I have been so so scared to share this. I was raped in mid October by the WWE Enzo Amore (also known as Eric Arden) & Tyler Grosso & TOOPOOR let it happen as accomplices. I was in a mental hospital for 45 days after it. They ARE NOT good people. pic.twitter.com/VhyG6oaDwg

A rep for the Phoenix Police Department confirmed that a report was filed and the incident is currently under investigation. However, Satin was told that the bulk of the investigation is complete and police are now waiting for the lab results.

Sources tell Satin that alleged incident took place on Oct. 19 in the early morning. According to Enzo’s Instagram account, he was in Phoenix, Arizona on Oct. 18 and returned to Los Angeles, California (where he lives) the next day.