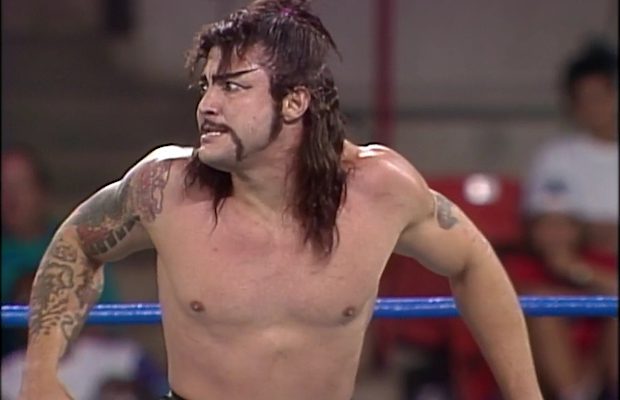 Chris Champion, who wrestled for Jim Crockett Promotions as one half of The New Breed tag team and later reemerged as Yoshi Kwan in WCW, passed away on Wednesday at the age of 57.

Warren Wolfe, who wrestled under the name Wolfie D for the WWF, WCW, and ECW, and later Slash for Total Nonstop Action Wrestling, broke the news of Champion’s death on his Facebook page.

Wolfe wrote, “Another close brother has passed away. Chris Champion took me under his wing when I was about 16. I was a huge fan of his as the New Breed growing up. We both loved over the top wrestling gimmicks…we came up with all sorts of stuff from a crash test dummy idea to The Cyberpunks. He was also responsible for suggesting Jamie and I do a white rapper gimmick as a team, which ultimately took us as far as Wrestlemania. He handed us a hubcap at a show one night that he was booking and said, “Wear this around your neck and hit them with it for the finish.” I have a lot of gratitude for Chris and tons of memories. Thank you for everything my friend.”

Champion — real name Christopher Ashford-Smith — was trained by the Malenko family and made his wrestling debut in 1984 under the name Dennis Smith. In 1986, he began working for Florida Championship Wrestling and changed his ring name to Chris Champion.

While in Florida, Champion teamed up with Sean Royal to form a tag team called The New Breed. They had a unique gimmick as in 1986, they claimed to be sent back from the year 2002 to wrestle. They claimed that Dusty Rhodes would be elected President of the United States in the 2000 election, and addressed him as “Mr. President.” They also referred to having robots and sported very unusual haircuts and bright “futuristic” ring gear in neon colors. Their entrance music was the Beastie Boys’ song “Fight For Your Right to Party.”

Champion and Royal moved to Jim Crockett Promotions in 1987, where they worked as a bottom-level team. They were programmed against The Rock ‘n’ Roll Express (Robert Gibson and Ricky Morton), but Champion got injured in a car accident. When he returned to television wearing a cast, it was decorated with microchips and other computer paraphernalia. They then began feuding with The Midnight Express (Stan Lane and Bobby Eaton), but their program was cut short after Royal opted to retire from wrestling to focus on his family.

After The New Breed broke up, Champion teamed up with his real-life brother Mark Starr. They competed together in the 1988 Jim Crockett Sr. Memorial Cup Tag Team Tournament, beating the masked team The Twin Devils in the opening round, before losing to The Powers of Pain (The Barbarian and The Warlord) in the second round.

Following the tournament, Champion briefly competed as “The Karate Kid,” which played off the 1984 movie of the same name. Ric Flair, Barry Windham, and wrestlers complained of Champion’s stiff kicks and he left the Crockett territory in 1988.

Following his departure from JCP, Champion showed up in Continental Wrestling Association teaming with Starr to form a team called Wild Side. While there, they reignited their feud with The Rock ‘n’ Roll Express.

In late 1989, the CWA became United States Wrestling Association, and with the new name came a new attitude from Champion, who broke up Wild Side and began working as a babyface. Champion had feuds with USWA’s top talent such as Jerry “The King” Lawler and Dirty White Boy. For a while, Champion worked under the name Kowabunga, where he dressed in a Teenage Mutant Ninja Turtles bodysuit and mask.

Champion began working for WCW in spring 1993, where he adopted the name, Yoshi Kwan. Originally, the name was supposed to be “Yochi Kwan” — a Chinese name — but announcer Tony Schiavone said his first name as “Yoshi” (which is Japanese) on television, and it stuck.

WCW billed Kwan from Asia (either Hunan or Hong Kong) and he wore makeup to appear Japanese. Portrayed as a mercenary, he playing up Japanese stereotypes in a cartoonish manner.

Managed by the legendary Harley Race, Kwan mostly put over babyfaces who were on their way to facing Big Van Vader. His most notable storyline was with Mick Foley, who wrestled under the name Cactus Jack. Vader took out Jack and swiped a pouch containing something important to him. In Foley’s quest to get to Vader, he had to get past Kwan. On September 19, 1993, Jack beat Kwan at Fall Brawl 1993 in a Bounty Match to regain the pouch.

Kwan’s match against Jack is his most notable WCW bout as it’s the only time he wrestled on pay-per-view. It’s also his only match on the WWE Network.

Shortly thereafter, Champion suffered a knee injury and he left WCW by the end of 1993. He continued working under the name Yoshi Kwan for various independent promotions in the Southern part of the United States.

In July 2002, Champion suffered a major stroke and was in the critical care unit for a while after that. He was able to make a full recovery from the stroke and returned to wrestling. He adopted a character called Sinn that he used both in the United States and in the United Kingdom.

Up until this year, Champion was still wrestling as Yoshi Kwan. After hearing of his passing, Tommy Dreamer tweeted this photo of them hanging out back in February.

Sad to hear the passing of
Yoshi Kwan aka New Breed Chris Champion
Spent the day w/him in February pic.twitter.com/8SoVkQW3HB

There’s no word yet on Champion’s cause death. According to Mike Johnson of PWInsider.com, that Champion suffered another stroke.

Champion is the seventh former WCW competitor to pass away since June and the third since last week. The others are Chuck Williams (aka Rockin’ Rebel), Vader, Johnny Attitude, Masa Saito, Jim “The Anvil” Neidhart, and Doc Dean. Both Neidhart and Dean passed away on August 13.