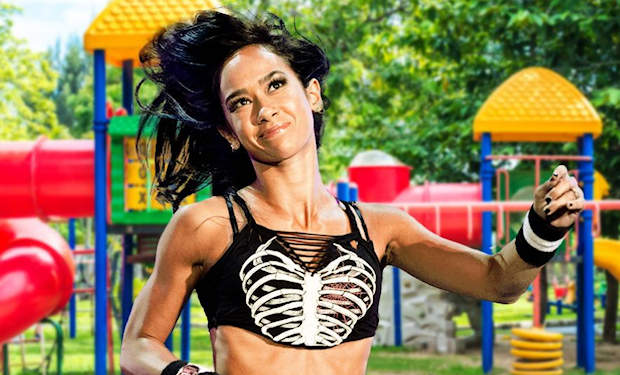 In light of news of Alberto Del Rio being released by WWE on Thursday “due to unprofessional conduct and an altercation with an employee,” it has been disclosed that Divas Champion AJ Lee was almost fired last year for similar behavior.

During filming of WWE’s Tribute to the Troops event on December 11, 2013 at Joint Base Lewis-McChord in Pierce County, Washington., Lee’s relationship with CM Punk became a story when the WWE Diva confronted NBC Sports personality Michelle Beadle after Beadle had spoken to him. Beadle and Punk had been acquainted long before Lee’s relationship with Punk began.

Shortly after WWE announced that Del Rio was let go “due to unprofessional conduct and an altercation with an employee,” Ring of Honor founder and RF Video owner Rob Feinstein claimed that Del Rio slapped a member of WWE’s social media team at a television taping this week. This claim was backed up by both F4WOnline.com and PWInsider.com. Then, as members of the F4WOnline.com message board were discussing Del Rio’s termination and speculating which WWE employee was on the receiving end of his slap, Wrestling Observer editor Dave Meltzer remarked “Cody Barbierri.”

On LinkedIn and Twitter, Barbierri identifies himself as WWE’s manager of social media live events. Though not identified by name, F4WOnline.com’s updated story on Del Rio’s termination says the altercation involved the company’s social media manager. According to the website, WWE’s social media manager was supposedly asked to wipe his plate clean following a meal in catering. He allegedly joked that it was Del Rio’s job to clean the plate, which could be perceived as racist by Hispanic people. Del Rio was informed of the comment, and confronted him. The individual did not apologize for his remark and then smiled at him. Fuming, Del Rio slapped him.

Meltzer addressed the matter again on the F4WOnline.com message board in response to a user comparing it to Lee’s outburst at Beadle. He revealed that WWE officials had decided to terminate her contract over her unprofessional conduct, but were overruled by Vince McMahon.
“A.J. wasn’t safe at all,” Meltzer wrote. “There was a reason she wasn’t fired and it had nothing to do with Punk being her boyfriend nor how good a performer she was, although her star power did play into it.”

He continued, “The decision was made to fire her but Vince overruled it because he saw the big picture. It’s very complicated, but in that issue, Vince was savvy way beyond those underneath him and saw what would happen long-term and made the big picture smart call. If that happened now, the situation would be the same and she wouldn’t be fired for the same reason. Her being fired for that specific incident would have caused a chain of events to happen next that Vince thought would do the company more harm than good. There is no guarantee he was right in how he thought it would play out but it was far more foresight than is usually exhibited in these situations.”

One month later, in his final interview before leaving WWE, Punk offered his take on the situation to MMA reporter Ariel Helwani: “A bunch of horseshit. I don’t know what a lie was. I thought me and Beadle were pals. She had this group of women and they walked past me and she said some disrespectful shit and I was just like ‘whoa’. My girlfriend pulled her aside in front of this same group of people and was like, and she introduced herself, and she was like ‘Don’t be disrespectful to my boyfriend’ and Beadle just went ‘okay’, and walked away and that was it. … She walked by and said ‘what’s up fuck-face’ and high-fived one of the girls.”

In May, Beadle appeared as a guest on The Ross Report podcast with WWE Hall of Famer Jim Ross and she went into great detail on what happened that night, the fallout, and how she feels about it: “Usually when things like this happen I try to ignore them. I just think, ‘okay, crap happens, the world will never know, blah, blah, blah’. But then, you know, I went to Tribute to the Troops and was honored to be asked to be a part of it by WWE and got to do a thing in the ring with John Cena and a couple things there. The back story… the thing about it is is social media is so whacked. All that stuff came out and it was ‘oh, you were flirting’. Look: First of all, when I’m flirting people will know I’m flirting. I’ve also known Phil for a few years at this point and I had, at that time, considered him a friend. We texted on a regular basis, we’ve had dinner numerous times; it’s just one of those things where he’s not my friend, whatever. It was what it was. I thought it was a friendship, I guess I was wrong.

“But I show up at Tribute to the Troops, I see him in the hallway, I say ‘what up, f-face’, which is my very loving way of referring to my friends. Like, I don’t call my friends… I just… I’m an idiot. I call them all kinds of names, that’s how you know I like you. He was alone in a hallway, he didn’t really say anything. I was with P.R. from WWE and my assistant and we walked by. The next thing I know, she’s in my face yelling at me and I honestly, I swear to you, thought it was a joke. I thought I was being set up for like a ‘ha ha ha’. And I looked up at him and he wouldn’t look at me and he kept his back to us and she kept going and I just was blown away. So that was kind of it. I thought, ‘all right, no big deal’. WWE was apologetic to me on site and I just said ‘it’s not your problem, people are who they are’ and that was it. I thought it had died but when I got home like that following week it hit all the blogs and all the wrestling peeps had all this information and that’s when I finally… I issued like a three part tweet just to say my side of the story because it was getting really old (hearing) that I was trying to take someone’s man or whatever high school crap people want to say.

“So, that’s all. And, you know, Phil and I stopped being friends that day and I wish him the best of luck and that’s it. It’s a bummer because I always respected him. I thought he was one of those cool guys that kind of didn’t fall into a certain role and kind of did what he wanted but to watch all that happen and to have somebody tattle on me and have their girlfriend get in my face is a little pathetic. But it’s okay, I’ve moved on.”