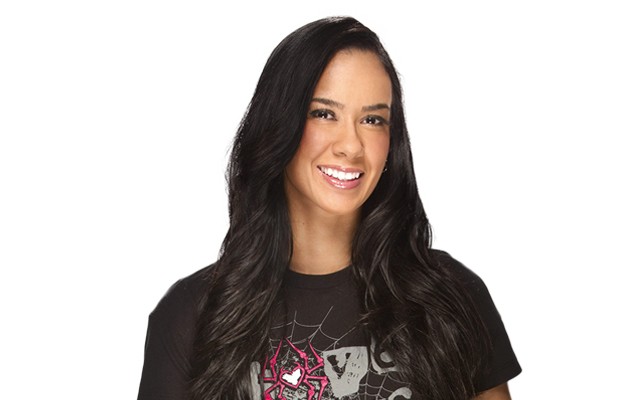 No WWE Diva has commanded attention quite like AJ Lee. T-Shirts, watches, iPhone cases, hoodies, even baby bibs – her likeness is on a neverending stream of products. She’s like a female real-life version of Krusty the Clown. WWE wouldn’t put out so much AJ merchandise if she didn’t have such a devoted fanbase. That’s also why there is so much AJ coverage on PWPIX – the amount of attention she receives online demands it.

But with such a devoted fanbase, there is bound to be a few people who go overboard in their AJ fandom and invade her personal space on the occasion they are physically near the WWE Diva. And’s that probably why she recently introduced a “no touching” policy when posing for photos with fans.

A fan spotted AJ near the site of a WWE live event in Texas over the weekend and asked her for a photo-op. The WWE Diva agreed, but on one condition: “No touching.” She added, “sorry.” He replied, “Understood, no problem.”

AJ didn’t say “no touching” to just this one fan. A search on Twitter reveals that she said the same thing to a male fan who wanted to pose for a photo with her at WWE’s Axxess event in April. She posed for the photo, but with AJ staying in her seat and the fan slightly leaning across her table. In AJ’s defense, a fan claimed in a reply to the above photo that she introduced the “no touching” rule after an incident with a male fan inappropriately touching her. This is likely the case, because she previously got up close with fans. The male fan in the above photo said she put her arm around his waist when he first met her a few years ago.

With that being said, her policy may only apply to male fans. There is another photo of AJ taken at that same spot in which she has her arm around a young girl.

Related ItemsAJ Lee News
← Previous Story Is There Heat Between Nikki Bella and AJ Lee?
Next Story → AJ Lee Was Almost Fired By WWE In 2013