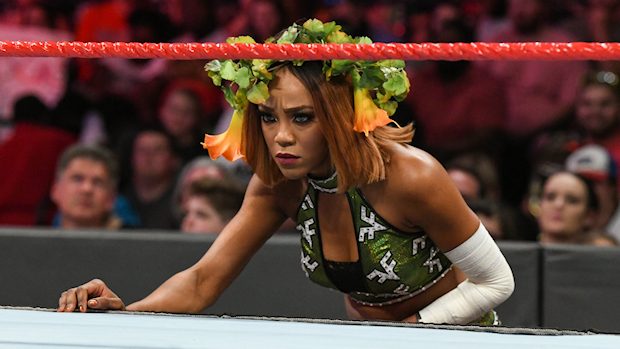 – Paige isn’t the only WWE star to change up her look this past week as Alicia Fox did as well.

After accompanying Alexa Bliss on Raw last Monday, Fox bleached most of her hair blonde. She showed off her new look at live events over the weekend and on Instagram.

Just a brace… cast is off!! That’s a year out of commission! I have a bit of pent up energy… a lion in a cage never stops being a lion. #unscriptedreality #evolution @wwe

Kanellis has indicated that she would like to wrestle at WWE’s first all-women’s pay-per-view event, WWE Evolution, on October 28.

– Zelina Vega is Lilian Garcia’s next guest on Chasing Glory with Lilian Garcia and the interview promises to be emotional. You can listen to it today via LilianGarcia.com.

Girlllllll, I can’t wait for everyone to hear your story tomorrow on #ChasingGlory @Zelina_VegaWWE ! Not sure there will be a dry eye in the world 🌎. SO powerful. Thank you for opening up as much as you did! 🙌🏼❤️ https://t.co/GjG3JrneCe

Here’s a reminder about tomorrow’s special and emotional episode with #LaMuñeca @Zelina_VegaWWE as she is my next guest on #ChasingGlory ! Real, Raw & Inspiring doesn’t even begin to describe it. So fire up your #podcast apps and join us TOMORROW!! pic.twitter.com/eTuKXF5jRv