Bobby Roode On WWE Stars He Wants To Face, If He’s Thought About His WrestleMania Moment, Glorious 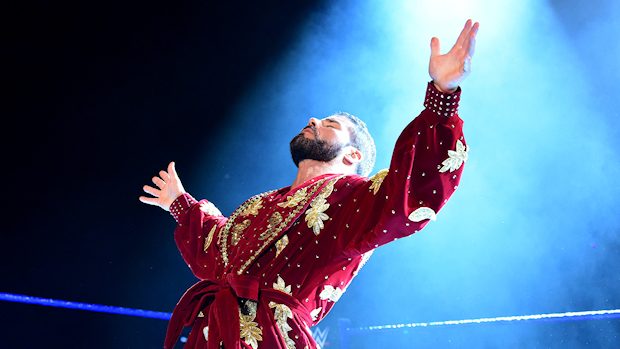 Bobby Roode was recently interviewed on the Baby Huey and Bimbo Jimbo show and talked about a variety of topics from his time in NXT and the main roster so far. Here are the highlights:

On joining the WWE at this point in his career:

“I always wanted to be a part of WWE. I have been in this business for almost 20 years. 19 to be exact. Back in my early days I had many tryouts here, and tried to show my face as often as possible whenever WWE would come around. The timing wasn’t right for whatever reason things just didn’t happen for me back then, but I was able to continue on in this business and make a name for myself in other places all over the world, and the timing was right. The time was right for me to move on and come to WWE.”

Why his time in NXT was so special:

“My time at NXT the last year and a half has been the most grateful in a lot of ways. It really brought my passion back for this business… To be put in the position that I was in NXT as the champion and the face of the brand for over 6 months was an amazing experience.”

On having no issue with joining NXT before the main roster:

“I was very excited to be a part of NXT actually because it was such a hot brand! At the time Finn Balor was down there. Shinsuke Nakamura was just starting out. Samoa Joe, Austin Aries, guys who I had the pleasure of working with in the past. So, I was extremely excited about going down there. The talent down there was off the charts. To be a part of the WWE itself was just something that I looked forward to. Getting to NXT, and getting a chance to like I said to take that position and be at the forefront and to be in the main events and eventually to become a champion was everything that I was hoping for. It was just an amazing experience down there, such a great brand to be a part of.”

“Well I had a different song actually picked out for my debut when I was going to start on NXT TV, but about a week before that I was at the NXT TV taping, and Triple H came up to me and asked me to listen to this song. He thought this song may have fit my character a little better. I had some discussions with Triple H about what I wanted to do, and the character I wanted to portray when I started out. He had me listen to this song, and to be honest I knew it was different than everything else that was in the WWE I knew it was totally, totally different. I thought it could go one of two ways: It could really suck, and be a career killer, or it could be really great. It turned out to be, dare I say GLORIOUS. It’s been an amazing experience. I remember when I debuted at NXT Takeover Brooklyn II, SummerSlam weekend last year. When my music hit for the first time and 15 thousand people sang along with it I knew that I had something special. You know the song itself is half the battle. You think about guys like the Undertaker, HHH, Stone Cold Steve Austin, The Rock that when those songs hits before they even walk down the aisle and you have that reaction from the people half that battle is won for you already so I was very fortunate to get that song, and it’s been fun.”

If he has looked ahead about the chance to have a WrestleMania moment now that he is on the main roster:

“It’s kind of in the back of your mind obviously because you have that opportunity hopefully. Hopefully I am given the opportunity to be a part of it, but the ball is in my hands right now…WrestleMania is still many months away, but I am hoping to get an opportunity here to prove myself and have some great matches, and to fit in with Smackdown, and be a big part of it. If I continue to work hard and do the things that I did down in NXT here I’m pretty sure I’ll get that opportunity at WrestleMania.”

On who he’d like to face from both the Smackdown and Raw roster:

“So many guys. I mean there really is, and I’m not kidding. The first guy that kind of comes to mind here on the Smackdown roster would be A.J. (Styles). A.J. is one of those guys that I had the pleasure of coming up together in the business with. He’s been in the business as long as I have, and we’ve traveled many roads together, and been in the ring a lot, but never on a WWE stage, so that would be very special for me…Anybody on Raw? I mean again there are so many guys over there. John Cena would be awesome. Braun Strowman…I mean the names go on and on and on guys that I haven’t been in the ring with. This is a brand new platform for me. A lot of uncharted waters, and a lot of places I want to go, and a lot of guys I want to face. Very exciting times for me.” ​