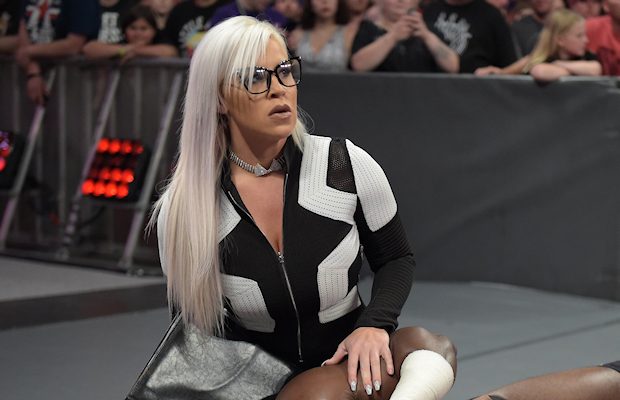 – Dana Brooke has issued an apology to fans for being unable to appear with Apollo Crews and Titus O’Neil at last night’s WWE live event at the Wells Fargo Center in Philadelphia, Pennsylvania.

Travel issues caused Brooke to miss the show, which she blames on American Airlines. On short notice, the airline canceled her flight from Orlando International Airport and rebooked her on a flight from Miami International Airport. She then missed her initial flight because it took her an hour to retrieve her luggage. She eventually made it to the show but after Titus Worldwide had wrestled Raw Tag Team Champions “Woken” Matt Hardy and Bray Wyatt.

#wwephilly I’m sorry I didn’t grace you with the whole #titusworldwide group tonight! @AmericanAir really let me down 😩 was tryin my best to get there! Made it during intermission.. i tried my best ! Blame #AmericanAirlines

@AmericanAir what is this .. you cancel my flight and then rebook me out of Miami … and then takes an hour to get the luggage and miss our flight !

Dana was on time for her original flight out of Orlando as she posted this busty photo of herself at the airport.

– Every WWE Superstar should expect the unexpected — even in the cozy confines of an arena restroom. Here are 10 of the most outrageous bathroom incidents in WWE history.

– An all-new episode of Table for 3 featuring Alexa Bliss, Trish Stratus, and Lita will air immediately following Raw on the WWE Network. Here is the synopsis: