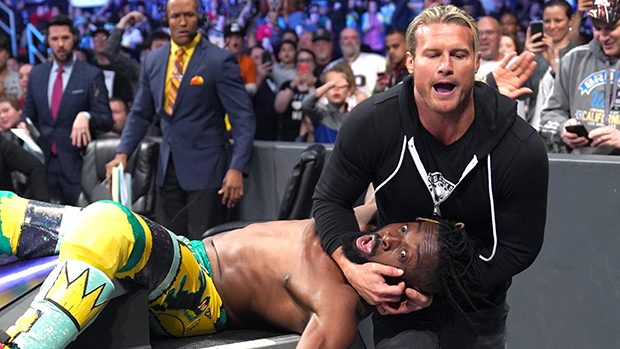 Dolph Ziggler made his return to WWE television on this week’s episode of SmackDown LIVE.

After WWE Champion Kofi Kingston defeated Sami Zayn in a non-title match, Paul Heyman appeared and teased that Brock Lesnar was there and going to cash in his Money in the Bank briefcase. Ziggler then attacked Kingston instead. He put Kingston’s head inside of a chair, slammed it into the announce table, and continued to attack Kingston as referees tried to stop him.

Kingston was put on a stretcher after the attack angle. When he got to the stage, Kingston insisted on walking to the back on his own.

Ziggler came back out in front of the audience to cut a promo. Ziggler said he should have been the person who did what Kingston did by taking advantage of an opportunity and becoming champion. At the end of his promo, Ziggler said he’ll defeat Kingston for the WWE Championship at WWE Super ShowDown and the WWE Universe will admire, respect, and love Ziggler.

Prior to Kingston vs. Zayn, it was indicated that Big E had also been attacked backstage. The announce team noted that Xavier Woods accompanied Big E to a “local medical facility.”

According to Dave Meltzer in the Wrestling Observer Newsletter, Owens was originally scheduled to face Kingston at Super ShowDown, but he refused to travel to Saudi Arabia. WWE then put Ziggler in the spot a few days ago.

The feeling among management is that they had nobody ready to face Kingston at Super ShowDown. They didn’t want a Raw wrestler in the spot, Triple H vs. Randy Orton and Finn Balor vs. Andrade are already booked for the show, and Daniel Bryan isn’t going to Saudi Arabia. Apparently, the only other name considered for the spot was Elias.

Ziggler, who remained under contract to WWE during his absence, was booked by the company to appear in Australia at the Oz Comic Con that weekend, but they opted to pull him and send Carmella in his place.

Prior to Tuesday night, the last time fans saw Ziggler on WWE programming was in January at the Royal Rumble. Ziggler entered the Men’s Royal Rumble Match at No. 28 and eliminated his former tag partner, Drew McIntyre, before being thrown out by Braun Strowman. Despite his absence, he remained on the WWE roster as a member of Raw.