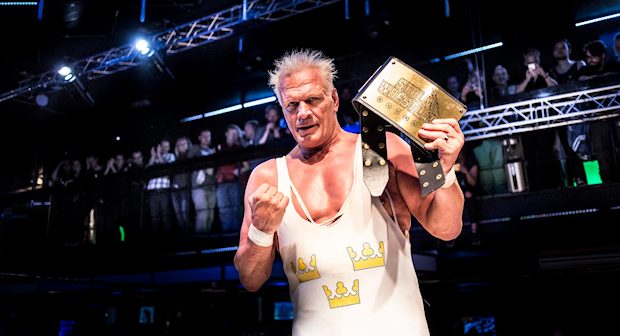 Frank Andersson, an Olympic bronze medalist who wrestled for World Championship Wrestling (WCW) in 1994 and 1995, has passed away.

According to Swedish news outlets Expressen and Aftonbladet, Andersson died on Sunday as a result of complications from heart surgery. He was 62 years old.

Andersson had suffered from heart problems for some time and underwent heart surgery on Thursday at Karolinska University Hospital in Stockholm, Sweden.

Andersson was slated to have a heart transplant within 100 days of the operation, but his heart gave out. He died surrounded by friends and family after his life support machine was turned off.

“He has been so terribly strong and planned the future, but he did not make it,” friend Robert Gidlof told Sport Bladet.

“We sat for over two hours and we laughed and joked. It’s so unreal.

“We planned the future after the surgery.”

Svante Andersson added, “He had a big heart, but it was not strong enough this time.

“This match was too tough. Something happened tonight, doctors do not know exactly what happened.

“We turned off when there was no cardiac activity. The organs were knocked out. I sat next to him and he fell asleep in peace. There was no pain.”

Andersson had a rich amateur wrestling background, winning several gold medals around the world as well as a bronze medal at the 1984 Summer Olympics in Los Angeles, California. In 2006, he was inducted in the Amateur Wrestling Hall of Fame.

Andersson crossed over to professional wrestling in the early 1990s and was trained by Brad Rheighans, a former Olympic wrestler who competed for the World Wrestling Federation (WWF), American Wrestling Association (AWA), and New Japan Pro-Wrestling (NJPW). Andersson made his wrestling debut on September 9, 1991, as Rheighans’ tag team partner in NJPW. He wrestled nearly 20 matches before his run ended in December 1991.

Andersson wrestled a single match for the WWF, which took place on April 8, 1993, in Paris, France. He beat a jobber by the name of Red Tyler. This was the opening match of a show that featured Shawn Michaels, Yokozuna, Lex Luger, Mr. Perfect, and Kamala. The WWF did not offer Andersson a contract following the match.

Later that year, WCW signed Andersson. The idea was to promote him as a big star in Europe since the company was touring the continent more frequently after signing “The British Bulldog” Davey Boy Smith. He was never given a sizable push after making his debut the following year. He mostly worked the company’s secondary shows, WCW Worldwide, and WCW Pro. Most of his matches were only shown on European television.

Despite not getting a strong push from WCW, Andersson went undefeated, according to Cagematch.net. He beat Stevie Ray in his first three matches (then known as Kane), and then beat Booker T in his next four (then known as Kole) — all in Germany. The only other wrestlers of note he beat were Alex Wright, Sgt. Buddy Lee Parker and Bobby Walker.

Andersson wrestled his final match for WCW on June 26, 1995, and retired from wrestling. Following retirement, he dealt with a number of personal problems, including filing for personal bankruptcy and undergoing rehab for drug and alcohol addiction. He rebounded and was able to use his celebrity to transition into several mainstream appearances in his native Sweden, including their version of Dancing with the Stars and survivalist reality series Expedition Robinson V.I.P.

Andersson made a wrestling comeback in 2014 for STHLM Wrestling, a promotion based in Stockholm, Sweden. He won the STHLM Wrestling Championship on September 6, 2014, beating Ken Malmsteen (he is holding the title in the above photo). He lost the title on September 12, 2015, to The Beast.

Andersson is the eighth former WCW wrestler to pass away since June and the fourth since August. The other seven are Chuck Williams (aka Rockin’ Rebel), Vader, Johnny Attitude, Masa Saito, Jim “The Anvil” Neidhart, Doc Dean and Yoshi Kwan.

Here are 10 of Andersson’s matches, including eight in WCW and his lone WWF match.

In the match below, Andersson beats the future Booker T in Germany.