Is Nia Jax Supposed To Be A Heel Against Ronda Rousey? - Backstage News - PWPIX.net

Is Nia Jax Supposed To Be A Heel Against Ronda Rousey? – Backstage News 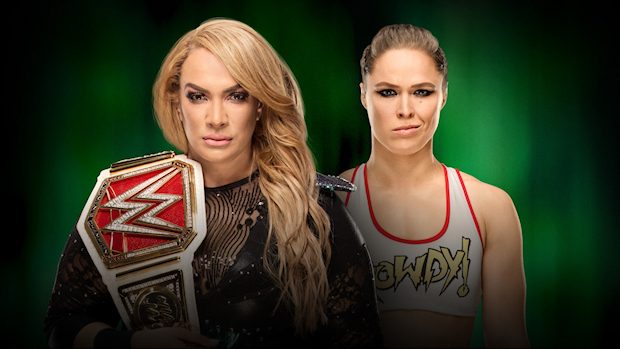 Following an unexpected challenge, Rousey will go up against Jax for the Raw Women’s Championship this Sunday at WWE Money in the Bank. Since Rousey is still a newcomer to WWE, more of the burden of building up this match has fallen on Jax’s shoulders and many have taken notice of her apparent transition from babyface to heel ever since “The Irresistible Force” threw down the gauntlet in unexpected fashion at NBCUniversal’s Upfront in New York City on May 14.

Two weeks ago on Raw during a match against a local competitor named Michelle Webb, Jax allowed herself to be placed into Rousey’s dreaded signature maneuver, the Armbar, at which point she demonstrated her planned counter by hoisting Webb into the air and powerbombing her into the mat. She then dropped Webb with a Samoan Drop before demonstrating her further prowess by administering a leg drop and a rolling senton. Having apparently made her point, Nia invited Rousey into the ring to help Webb to her feet.

While Jax came off as a heel in the segment, that was actually not WWE’s intent with the program.

According to John Pollock of PostWrestling.com, he was told this by “someone with knowledge of the situation in WWE” and “that the intent was never to turn Jax heel in this program.”

The WWE source said that Jax took acting like a heel too far on Raw on May 28, so an angle was designed for last week’s show as a “course correction” to get Jax back and closer to a babyface role.

On Raw last week, Jax faced Natalya in a singles match. Natalya tweaked her knee and Nia, who didn’t see the injury occur, capitalized with a Samoan Drop to earn the win.

Jax seemed genuinely concerned about a potential injury to the veteran wrestler once she realized what had happened, but she didn’t get to help Natalya out all that much: Rousey left the announce desk, entered the ring and successfully warned Jax away from Natalya’s side with little more than a glare and some pointed words.

Then this week on Raw, the two finally came to blows as Rousey used her signature submission hold on Jax during an in-ring segment.

According to the WWE source, the idea for the program is that it’s between two babyfaces with added tension for their match at Money in the Bank.