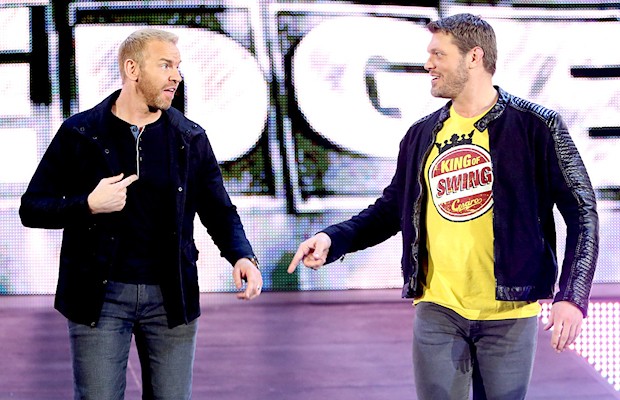 – Steve Austin’s live WWE Network podcast with Edge and Christian kicks off with the three backstage at RAW in Baltimore. Austin wishes us a happy Labor Day and welcomes us. He knows tonight’s show will be fun because of his guests – he introduces them. Austin mentions getting drunk with Christian at WrestleMania 30 but it’s been a while since all three of them were together. Austin shows us photos of some of their previous looks. He says they looked like rock stars then but look like responsible human beings now. Edge talks about how they had their daughters six weeks apart and didn’t know until Edge called Christian to tell him about his baby coming. They didn’t time it like that but it worked out to where their daughters are friends. Edge currently lives in Asheville, North Carolina. He says he narrowed his home down to Portland, Seattle or Asheville. He and Beth Phoenix pretty much planned to get pregnant. Her name is Lyric Copeland. Christian is living in Tampa and has been since 2001. His wife goes to the University of Florida.

Austin asks how they transitioned from the daily WWE grind to normal life. Christian says it’s a little bit of a culture shock to decompress from that because you don’t know what to do with yourself. He says he was always getting in his wife’s way but found ways to get busy. Edge says honestly he was ready to get off the road. Edge says WWE was his focus from the time he was 9 years old and he was just ready. He had 1 year left on his deal when he had to retire and he figured that would be it, he already had the house in Asheville. He says he was still trying to put over guys like Dolph Ziggler and Alberto Del Rio. He mentions trying to help SmackDown before he left. He talks about how the Haven producers saw his retirement speech and brought him on. He says he was planning on just growing a beard and “figuring it out” before Haven called. He was invited up for 1 episode and that turned to 40.

Austin says he has a serious question now. He asks if they will play his theme song on a couple of kazoos he has. They agree but they want Austin to play tunes on the ukulele. These guys really get along and are having fun with this interview. Edge says they were just having fun and that translates to people. Christian talks about how they were dark and mysterious when they were with The Brood. Austin sings “Kumbaya” for them. Austin has a Twitter question – what is their thoughts on the current tag team scene? They do keep up with RAW. Christian says tag team wrestling put them on the map and it just got turned up with The Dudley Boyz returning. Edge got emotional when they returned. They all are happy for The Dudleyz and agree this is their home. Austin believes they will be in the Hall of Fame. He talks about how the tag scene was flat for some time and says it pissed him off because he’s a fan of tag team wrestling. They talk about some of the science of tag team matches and says The Dudleyz coming back will be influential to remind other guys of some of the little things that make tag matches. He says it’s important they have proper tag teams now. They give props to Luke Harper. Edge gives huge props to “The Mechanics” Dash Wilder and Scott Dawson of NXT.

They joke about a “don’t look at me game” they came up with years ago and pulled it on Austin while they were tying him to The Undertaker’s cross during the RAW angle in The Attitude Era. Austin asks them both if they’re a sports entertainer or pro wrestler and they say pro wrestler. Austin asks Edge what Christian’s favorite match is and he says Randy Orton at SummerSlam. Christian says that’s wrong, his favorite is the ladder match against Del Rio where he won the World Heavyweight Title. Christian thinks Edge’s favorite is his WrestleMania match with The Undertaker. Edge agrees and says he felt validated by Taker, the company and the fans with that match. Edge says he came out last and was so amped he was losing feeling in his arms. Austin asks what their embarrassing moment in the ring was. Edge talks about doing a bulldog off the top rope with white tights on, during a pay-per-view, and having a close call. “I just clinched,” he says. Christian’s most embarrassing was during The Invasion where he did a move jumping off Edge’s back to land on guys on the floor. He stepped on Edge’s back but slipped on the sweat. His knees hit the top rope and he missed both guys on the floor.

Austin shows us TLC highlights and they talk about some of those matches. Christian talks about how after the first few, they tried to insert psychology so it wasn’t just a trainwreck. Edge says TLC was always going to be a “tornado in a trailer park” but they realized they had to top what they had done already. He says the matches were getting tougher on them. Christian believes the reward they got from TLC matches was worth it. Austin brings up The Hardys and The Dudleys. Edge calls it a perfect storm. Austin say they had to be taking care of each other and trusting each other with their lives. Austin asks how they felt the next day and they both say sore. Christian tried to go to the gym the day after the first TLC match but his was just in pain. He had a hole in his arm from a ladder screw. Edge says the following day was worse. Austin brings up Edge’s Sexton Hardcastle gimmick from before. Christian says he wore a mask and was known as The Male Nurse at one time. Austin asks now looking back who was Edge. Edge says a confused kid trying to make it in the business. They talk about how cool their entrance was with Gangrel in The Brood. Austin asks them how it feels to be backstage seeing everyone. Edge doesn’t yearn for it and says it’s good in bursts but it’s better to get home. Christian likes coming and seeing the younger guys who could use veteran leadership. Austin asks about their careers. Christian says they will always be one of the greatest tag teams. He says Edge has had one of the greatest careers ever and it doesn’t bother him when someone might say Edge had a better career. Edge thinks they might be the only tag team who became world champions but he’s not sure. Plus they were friends before this.

Austin asks how Edge felt going into the WWE Hall of Fame. He was surprised because it was just a year after retiring but he wasn’t going to say no. He got calls from Shawn Michaels and Bret Hart saying he deserved it. Christian was happy for him and felt he deserved it more than anyone. Austin asks Christian if he thinks WWE should induct him into the Hall. Christian says that’s not his place to say but Edge says he should be and says he has to be inducted. Edge adds that he’s starting a petition right now and plugs a hashtag. They agree that Michael “PS” Hayes and The Fabulous Freebirds should be inducted. Hayes helped them get going and Edge believes he saw a little bit of the Freebirds in them. They talk about “Wrestler Court” with The Undertaker. Austin brings up Vince McMahon and asks Edge about when Vince called him to tell him about his retirement. Edge says he felt sorry for himself for a little while and called Christian right away. He was already preparing himself but it came faster than he expected. He knew he didn’t have to make the decision and didn’t have to let him down. Vince told him, your career is done and you can’t wrestle anymore, this is what I’ve been told by doctors. Vince said he hated to tell Edge that but he wanted to be the one to tell him. Austin asks the biggest takeaway from his relationship with Vince. Edge says just how Vince looks at the world and sees the world. Edge says you start to see the world how Vince sees it and you think wow, that’s cool. Edge says it’s cool but not for him. He says he knows Vince would like to just go sit in the mountains sometimes like him but he can’t. Christian talks about Vince’s dedication to WWE. He says Vince’s work ethic is infectious and trickles down.

They talk about doing acting after WWE some more. Austin jokes that Christian made an appearance on Edge’s show and then it got canceled. They talk about how the “what?” phenomenon began between them but Austin used it in a promo. Austin asks their biggest regrets. Edge says he has none. He doesn’t think back and it was all good. He has nothing to complain about. Christian jokes that he regrets doing this podcast. He says he has no regrets. He probably went further than he had any business going and has no regrets. Austin asks how they want to be remembered. Edge wonders if it really matters. He says if adults look back and have fond memories, then mission accomplished. Christian jokes he likes to be remembered as better than Edge. He wants to be remembered as the guy who gave fans their money’s worth every single night. Edge says they had fun but when it was time, they knew how to get vicious. Austin asks them if he can do a “Five Second Pose” with them as the show goes off the air and that’s a wrap.