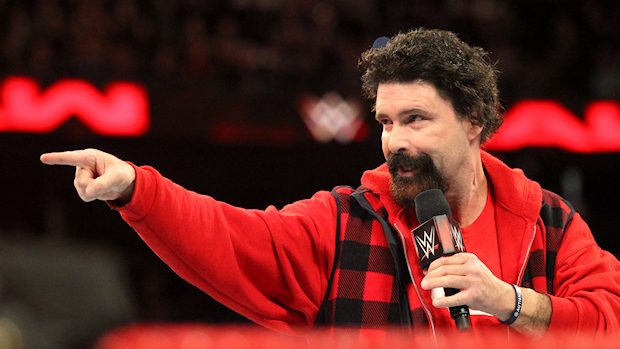 – Mick Foley underwent surgery on Monday for a knee replacement and says he’ll be on the shelf for a month before getting into physical therapy. He’ll then begin promoting his new book, Saint Mick.

Foley posted a photo of his knee scars on Tuesday night with the caption, “Yes, just me and my fairly grotesque knee hanging out, watching #SmackDownLive.”

– Apple unveiled the iPhone X yesterday, and the world is abuzz about the $999 device’s myriad features, including wireless charging, OLED screen and its Face ID facial recognition technology, which allows you to unlock your phone, pay for purchases and log in to apps by holding the phone up to your face.

But what if the owner of said iPhone X just can’t be seen, and has been informing the world he can’t be seen for 15 years now?

This was the dilemma posed by John Cena after the iPhone X was revealed.

Sooo #iPhoneX about #FaceID …ummmmm …. what do I do?

– A new episode of Total Bellas airs tonight at 9/8 C on E!. Here is the synopsis: “Nikki refuses to let her brother JJ talk to her boyfriend John Cena about JJ’s marital problems, afraid that John will never want to propose to her. Meanwhile, Bryan drives Brie insane with his passion for their new baby, pushing Brie to put her husband on a labor simulator so he can feel what its like to have a baby.”