Mickie James Celebrates The 13-Year Anniversary Of Her WWE Debut 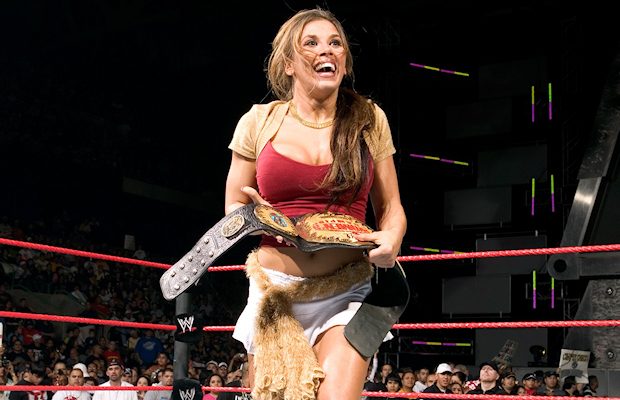 It was 13 years ago today when Mickie James made her WWE television debut on Raw by saving Trish Stratus from the wrath of Victoria.

After the match, Victoria attacked Trish, prompting Ashley Massaro to try and make the save. Victoria got the best of that confrontation as well. A mystery woman (James) then entered the ring and knocked Victoria out of the ring with vicious punches and kicks. The mystery women then picked up the WWE Women’s Championship and handed it to a baffled Trish.

Afterward backstage, the mystery girl introduced herself to Trish as Raw’s newest Diva, Mickie James, and that she’s a big fan. James said she idolizes her and had even written numerous letters. James then kissed Stratus on the cheek and gave her a hug before walking away

To celebrate the occasion, James threw herself a party and even had a birthday cake made.

Thank you @cakebycourtney for helping celebrate my 13 year @wwe anniversary today with this adorable cake. October 10, 2005 I made my first entrance into a Wwe ring… and what a journey it’s been. Honored to be doing something I love for so long. Big thanks to all my fans who supported me over these years. What's been your favorite wrestling memory of mine? #wwe #wwediva #cakes #womenswrestling #anniversary #celebration #rainbow

This was not James’ first appearance in front of a WWE crowd. Before Raw went live on July 25, 2005, in Cleveland, Ohio, James (introduced as Vickie Adams) accompanied Punk for a match against Rob Begley (aka Vik Dalishus from Ohio Valley Wrestling). James has said in interviews that the match was supposed to air on Sunday Night Heat, but WWE officials squashed the proposed pairing as soon as they returned backstage.

“CM Punk and myself debuted on Sunday Night Heat and that match was pulled off of the show because when we came (backstage), they’re like, ‘You guys don’t fit together. It was great, we loved it, but you guys just don’t work together,'” James said in a 2013 interview.

James also noted that she “was supposed to debut five times before (her angle with Stratus) even happened.”

James recently pondered her nixed pairing with Punk. A few weeks ago, a fan tweeted James a ringside photo he snapped of them that night and she responded with the following:

This was when @CMPunk & I “officially-unofficially” debuted. I’ve often wondered how our careers would have been different had they gone forward with this pairing and entrance into the @WWE @WWEUniverse #wellneverknow https://t.co/9O3iPR9h6l

James and Punk teamed one time a few years later, losing to Layla and William Regal in a Mixed Tag Team Match on Raw on February 2, 2009. Regal pinned Punk after striking his head with a knee to the temple.