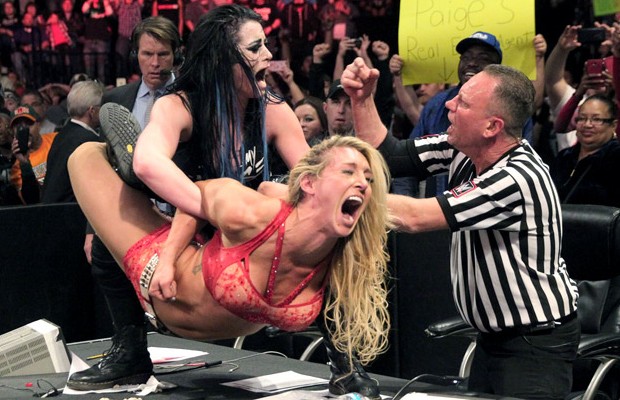 – Ric Flair may have been brought to tonight’s WWE RAW in Pittsburgh to announce a Paige vs. WWE Divas Champion Charlotte match for TLC. There have been talks about doing a possible Divas Ladder Match at TLC, likely between these two but I can’t confirm the participants.

– WCHSTV.com has an article about extra security at WWE live events due to the recent terror threat from the Islamic State (ISIS). The beefed-up security is still going on as fans at last night’s live event in Huntington, West Virginia were asked to arrive early and be prepared to go through multiple stages of security. The doors opened at 3:30pm for a 5pm show and every bag was checked, every person was checked with a metal detector wand and everyone wearing a heavy coat was searched. Another change is the addition of clear bags. Any fan with a large purse or backpack has to empty its contents into the clear bag and return their own bag to their car.

– Brad Maddox will reportedly be using the name “Mad Braddox” on the indies. As noted, he was fired by WWE last week after saying “cocky prick” during a dark match at the WWE TV taping in Indianapolis. Maddox wrote the following about taking bookings and re-tweeted fan art for his new name:

Ok here it is: bradmaddoxbookings@yahoo.com Tell all your friends. Really, like, build me up.