Renee Young On How She Hooked Up With Dean Ambrose, Total Divas Affecting Their Relationship - PWPIX.net

Home / Wrestling News / WWE News / Renee Young On How She Hooked Up With Dean Ambrose, Total Divas Affecting Their Relationship

Renee Young On How She Hooked Up With Dean Ambrose, Total Divas Affecting Their Relationship 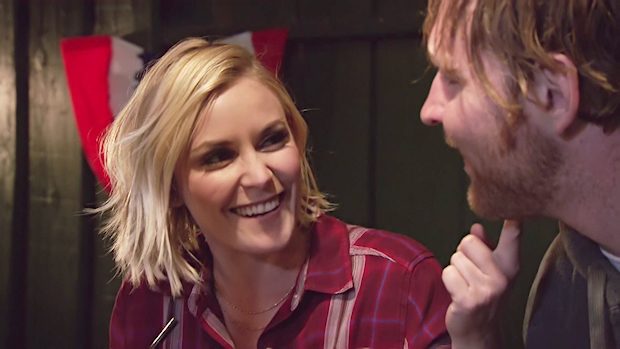 Renee Young is this week’s guest on Chasing Glory with Lilian Garcia and she opened up on her relationship with Dean Ambrose and much more. Here are a few highlights from the interview.

How she and Ambrose got together:

“I feel like we just always talked. We would like connect and hang out, but at this point, I did not know that he doesn’t talk to anybody, because he always just talked to me. So we would be on Voxer this app, it’s like a walkie-talkie app and we would just message each other all day long and we would always make plans, try to hang out.

“As soon as we actually like hung out, he came and met me in Orlando. We were on like neutral territory, I was down there doing NXT because there were times when he said he was going to come to New York and I’m like, ‘You’re not staying in my apartment! What do you think that means?!’ So he came to meet me in Orlando and we hung out and we’ve literally been together since.”

Her experience on Total Divas and how it affected her relationship with Ambrose:

“It was a cool experience, but I think when I was in the middle of it and even when we started and I get the call, ‘You’re going to be on Total Divas’, I was like ‘Okay…’, because I knew I was going to have to broach this subject with my significant other [Dean Ambrose]. Now listen if it was destiny, it probably would have been a little bit different, but I also might not have been on the show if it was just me. It was hard, it was really hard and even now when I see the girls and their on the road, and you’ve got a camera in your face, and you’re taking these vacations that aren’t really vacations, it’s exhausting, it’s really a lot of work. I commend them all for doing it. For the people that it’s great for, its great for, but I think the problem that I essentially ran into was that I’m not a private person and my husband is. I didn’t want to make him do something that he didn’t want to do.”

“It stressed me out more then, but I also was so much newer in the company that I felt like, and I did this to myself I think, but I felt like I was on such a tightrope about what I can say, what I can do, how I can behave, how am I supposed to come across. I was like, ‘Who am I? What is this thing that I’m delivering to people because this doesn’t feel like it’s me.’ I just feel like I had to rework how I speak and I can definitely be a little crass or I can make fun of stuff in ways that doesn’t work here. So I think now that I’ve been here long enough and I’ve been on the panels long enough, that I have such a better perspective of how everything works from a non-scripted idea. So I think if I were able to apply that again a second round, it might be a different outcome.”

Here is more of what you can expect in Lilian Garcia’s interview with Renee.

Prepare yourselves as @reneeyoungwwe talks about things she has never opened up about before! Tune in NOW to this personal and captivating episode of @chasingglorypodcast and learn about Renee’s inspiring journey into the WWE and her beautiful approach to life outside of the WWE as well. 🙌🏻 It’s about to get real, raw and inspiring with Renee Young! ⭐️ #CGsquad #chasingglory #podcast #reneeyoung #reneeyoungwwe #totaldivas #mondaymotivation #mondaymood #real #raw #inspiring ⭐️ Check us out on any of these great platforms and please rate, review, and subscribe while you’re there! @spotify @applepodcasts @iheartradio @spreaker_ @tunein @stitcherpodcasts @soundcloud #overcastpodcast #googlepodcast YouTube.com/LilianGarcia

Leading us into year number 2 of Chasing Glory, I sit down with none other than amazing WWE personality @reneeyoungwwe! From the start, Renee dives quickly into dealing with insecurities, especially in the entertainment world. She talks about growing up near Toronto being a child of divorce, how she was able to cope with not having both parents around, as well as her relationship with her brother. Hear what traumatic event happened on her 10th birthday with her stepfather that led to her growing up fast and created a need to lean on comedy to help lighten the mood. Renee reflects on her move to Los Angeles at the age of 19— and why she moved back after only 6 months. Hear all about her journey to becoming a Television Host, her triumphant road to the WWE (including her crazy audition), and how she got the name “Renee Young,” plus her feelings about being on the hit reality show “Total Divas” with her husband, WWE Superstar Dean Ambrose. In this interview she also tells us her one regret and why it’s hard for her to receive compliments. What does the future look like for Renee? Find out in this exclusive episode! #ChasingGlory #ReneeYoung #CGsquad #podcast #mondaymood #mondaymotivation ⭐️ It’s about to get real, raw, and inspiring with @reneeyoungwwe! ⭐️ Check us out on any of these great platforms and please rate, review, and subscribe while you’re there! @spotify @applepodcasts @iheartradio @spreaker_ @tunein @stitcherpodcasts @soundcloud #overcastpodcast #googlepodcast YouTube.com/LilianGarcia