The Revival Back In Action On Raw, Enzo Amore's Next Challenger For WWE Cruiserweight Championship - PWPIX.net

Home / Wrestling News / WWE News / The Revival Back In Action On Raw, Enzo Amore’s Next Challenger For WWE Cruiserweight Championship

The Revival Back In Action On Raw, Enzo Amore’s Next Challenger For WWE Cruiserweight Championship 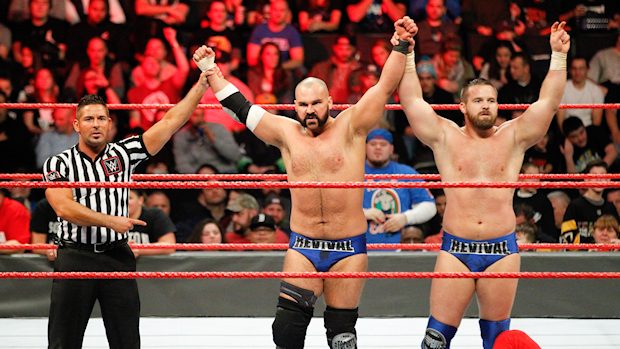 – After Scott Dawson was cleared to return from injury, The Revival had their first match as a team in over four months on Monday night.

Dawson and Dash Wilder took on Heath Slater and Rhyno in their return on Raw, with The Revival hitting the Shatter Machine to get the win. Apollo Crews, Titus O’Neil, and Dana Brooke were shown watching the match backstage while it was going on.

Dawson was expected to return this month after suffering a ruptured right bicep in August and later undergoing surgery. While he was out of action, Wilder wrestled on house shows and on WWE Main Event as he waited for his tag team partner to return to the ring. After their post-WrestleMania call-up, Wilder also missed a couple of months earlier this year due to a fractured jaw.

After defeating Gulak, Alexander shared a personal story about his daughter on Raw Fallout.

It was not announced when Alexander will receive his title shot.