Ronda Rousey Scheduled To Wrestle At Money in the Bank, Roman Reigns Sends A Warning, WWE In Spain - PWPIX.net

Ronda Rousey Scheduled To Wrestle At Money in the Bank, Roman Reigns Sends A Warning, WWE In Spain 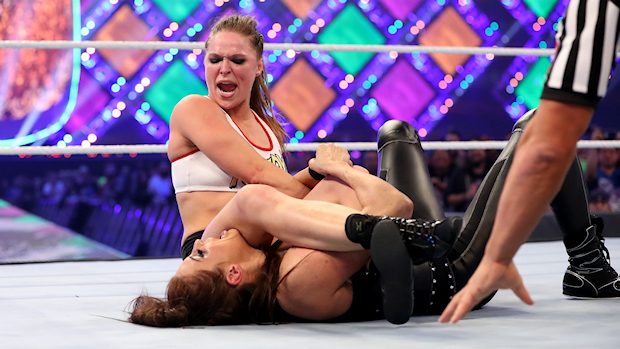 – After causing Stephanie McMahon to submit in a Mixed Tag Team Match at WrestleMania 34, Ronda Rousey will be returning to the ring for four live events this week in Europe. She is advertised to wrestle on Wednesday in Geneva, Switzerland, Thursday in Vienna, Austria, Friday in Turin, Italy, and Saturday in Paris, France. Her opponent on at least one of the events will be Mickie James, who she’s advertised to face in Paris.

As for Rousey’s next televised match, it looks like it will take place on June 17 at Money in the Bank. According to a report today by John Pollock of PostWrestling.com, Rousey is scheduled to wrestle at the pay-per-view event from the Allstate Arena in Rosemont, Illinois. Pollock adds that Rousey’s opponent (or opponents) for the show should be evident after Raw tomorrow in London, England.

It doesn’t look like Rousey will be on Raw tomorrow as Pollock expects her to be in New York City representing WWE at the annual NBCUniversal Upfront event with Nia Jax.

Rousey last appeared on Raw two weeks ago as she accompanied Natalya for a match against Mickie James. James was accompanied by Alexa Bliss, who Rousey chased at ringside.

– Roman Reigns sent out a warning today via Twitter about someone not making a name off of him and reminding everyone that Raw is his yard.

Might have made a name for yourself elsewhere, but I wouldn’t plan on making it off mine. This is #Raw and it’s #MyYard, you’re playing a tough guy, I am THE guy. #B2R

While Reigns didn’t name anyone, this seems to be directed at Jinder Mahal, who cost him a spot in the Money in the Bank Ladder Match during last week’s Qualifying Match against Finn Balor and Sami Zayn.

– It was announced at this weekend’s live events in Spain that WWE will return to the country on Nov. 3 for a show in Madrid and Nov. 4 for a show in Barcelona.