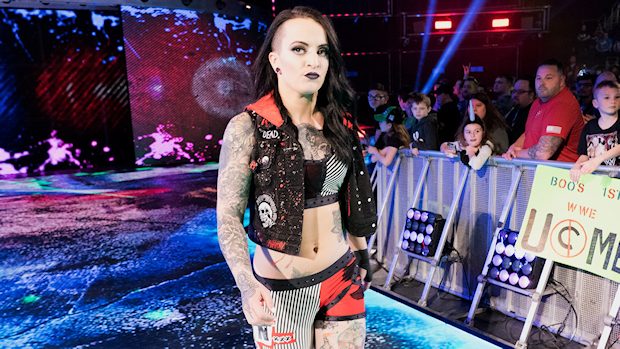 Just before Raw went on the air Monday night on the USA Network, WWE announced that Ruby Riott sustained an injury to her left knee at a live event over the weekend.

After undergoing an MRI on Monday to determine the extent of the damage taken, WWE announced Tuesday afternoon that “Ruby Riott’s MRI confirmed an MCL sprain in her left knee.” The MCL helps stabilize the knee alongside other connective tissues, including the ACL and LCL.

WWE’s announcement did not provide details on the severity of the sprain. Dave Meltzer said on today’s edition of Wrestling Observer Radio that Riott will likely not have to undergo surgery. He added that she will not be out of action for a long time, although she will “be out for sure for a couple weeks.” He also noted in the Wrestling Observer Newsletter that she will be evaluated on Monday, July 30 and we should know more at that point.

In a best-case scenario, the earliest she can return to Monday Night Raw is August 6.

Meltzer said on the post-Raw edition of Wrestling Observer Radio that Riott got injured wrestling Dana Brooke in a singles match last Friday at a WWE live event in Rapid City, South Dakota.

It’s unclear how exactly Riott got injured, but Meltzer speculates that it may have been caused by Brooke not wrestling on a regular basis since she’s usually in the corner of Apollo Crews and Titus O’Neil. This, however, is not completely true since Brooke has been getting more ring time in recent weeks at house shows, but only in tag team matches. According to CageMatch.net, Brooke faced off against The Riott Squad six times during the month of June. It was, however, their first-ever singles match, which Brooke ended up winning.

According to PWInsider, Riott has been on crutches since suffering the injury. She was backstage at Raw since she had the MRI at the site of the show, the Denny Sanford PREMIER Center in Sioux Falls, South Dakota.

Despite Riott’s absence from Raw (which Michael Cole acknowledged on commentary as simply due to injury), the rest of The Riott Squad can still cause plenty of mayhem on their own. Before Liv Morgan took on Ember Moon in a singles match, the blue-tongued brawler and Sarah Logan knocked over some objects in the backstage area while Elias played some riffs on his guitar.

Moon came out on top in this hard-hitting affair after nailing Morgan with the Eclipse.

In this post-match interview with Renee Young, Moon briefly said the following about her victory over Morgan despite the threat of Logan.

I only lost last night cause I was missing my bae @RubyRiottWWE .. don’t feel too special @WWEEmberMoon … I’m sure I’ll see you in that ring again 👅💙😏

Riott tweeted the following after Raw, which seems to indicate a feud with Moon.

With or with out me.
The #RiottSquad are the most dangerous women in this division. @YaOnlyLivvOnce proved that tonight.
And @sarahloganwwe said it best.@WWEEmberMoon…
You messed up,
because NO ONE CAN QUIET THE RIOTT! pic.twitter.com/jHYoNZO7GM