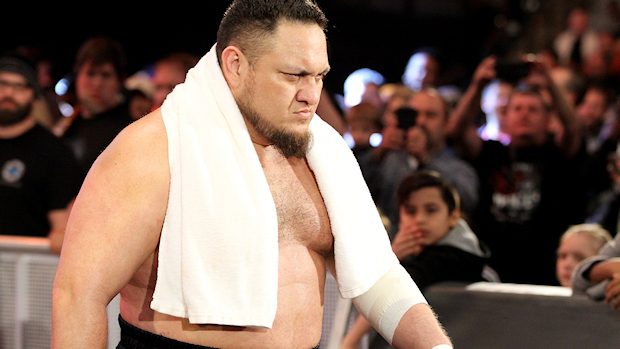 – Earlier today, Samoa Joe did media interviews in Memphis, Tennessee to promote tonight’s SmackDown LIVE event from the FedExForum and as you can see here, the WWE Superstar has a new hairstyle.

WWE’s Smackdown Live In Memphis tonight. I caught up with Samoa Joe about what to expect tonight and how he much he loves Memphis BBQ and Memphis’ history of wrestling or raslin’! See my report on @wmcactionnews5 at 4pm. @WWE @WWESmackDownLiv @SamoaJoe pic.twitter.com/GQjGM8HrW3

You could say this an old hairstyle since Joe had a similar look with the sides shaved back in 2012 and 2013 when he was in TNA.

Joe isn’t the only WWE Superstar to change up his hairstyle this week as Baron Corbin revealed a dramatic new look on Raw last night.

– Paige announced last night via Twitter that Daniel Bryan and Shelton Benjamin will face off on tonight’s episode of SmackDown LIVE.

About to fly to Memphis …& u know me. I’m all about making great matches for YOU.
Now, Shelton Benjamin & Daniel Bryan have shared some opinions about their opponents as of late, so I thought what better a match? So I am making it official. Shelton vs Daniel on Smackdown Live

This will be their first-ever match. Here is WWE.com’s preview:

Daniel Bryan’s passionate response to Big Cass’ interview on last Tuesday’s SmackDown was the talk of the WWE Universe, but his words also caught the attention of Shelton Benjamin, who had a few things to say about Bryan’s speech.

Hard to argue with @WWEDanielBryan about @BigCassWWE ..but the being a hard worker rant? GIVE me a break!🙄I’ve worked for companies & won champions around the globe. Not enough to just be “good” on #SDLive https://t.co/nFBmSBSfFZ

Benjamin will get the chance to back up his feelings tomorrow night, as Paige has placed him in a match against the leader of The “Yes!” Movement. Can Bryan shift his focus from Big Cass and deal with the mat maven, or will Benjamin prove that Bryan’s talk was just that? Find out tonight on SmackDown LIVE at 8/7 C on USA!

– Mark Henry celebrates his birthday on Tuesday as the WWE Hall of Famer turns 47 years old.

Happy Birthday to the WORLD'S STRONGEST HALL OF FAMER, @themarkhenry!