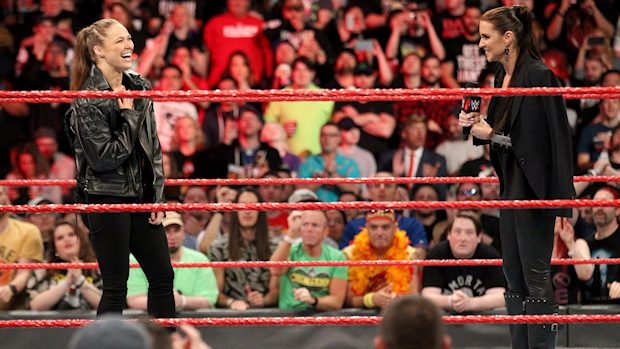 – Stephanie McMahon tweeted this message today congratulating Ronda Rousey on being the first woman to be inducted into the UFC Hall of Fame.

Congratulations @RondaRousey for continuing to blaze a trail for girls & women everywhere! You were the first-ever female Champion in @UFC and now you will become the first woman to be inducted into the @UFC Hall of Fame! #YouDeserveIt #UFCHoF #Respect pic.twitter.com/dzGjjsmUUI

UFC announced Saturday that Rousey will be inducted into the UFC Hall of Fame’s Modern Wing as a member of the Class of 2018. The 2018 UFC Hall of Fame Induction Ceremony will take place on Thursday, July 5, at The Pearl at the Palms Casino Resort in Las Vegas. The event will be streamed live and exclusively on UFC Fight Pass.

– WWE announced via Paige that Jeff Hardy will battle Shinsuke Nakamura tomorrow night on SmackDown LIVE. Here is a preview explaining what led to the match.

Shinsuke Nakamura is just days away from what is sure to be a brutal Last Man Standing Match against WWE Champion AJ Styles, but before he steps in the ring with The Phenomenal One, WWE’s Rockstar must deal with another titleholder on SmackDown LIVE – United State Champion Jeff Hardy.

It all started when Nakamura tweeted a picture of him and Hardy in the ring, but he declined to caption the photo.

The U.S. Champion snapped back at The King of Strong Style and shared his prediction for this Sunday’s WWE Title Match.

Maybe you should wait a week & caption a pic of @AJStylesOrg being the #LastManStanding at #MITB!..!

The two continued to trade barbs on Twitter, and WWE.com learned that Paige has confirmed a match between the two for Tuesday’s SmackDown LIVE. Will Hardy send Nakamura into Chicago with a loss, or will Nakamura prove that he’s ready to be the last man standing? Find out tomorrow on SmackDown LIVE at 8/7 C on USA Network!