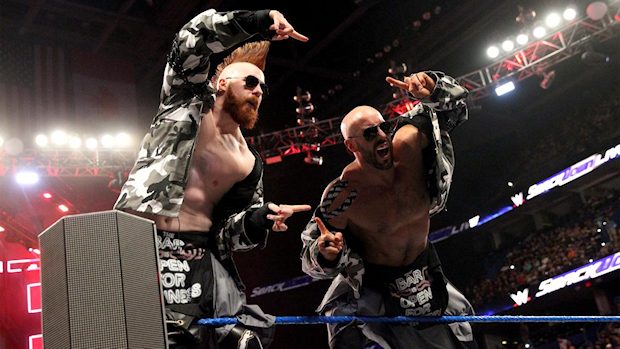 – Rusev and Aiden English will face Sheamus and Cesaro next week on SmackDown LIVE in a match that will determine who will challenge The New Day for the SmackDown Tag Team Championship.

Last night on SmackDown LIVE, Rusev Day beat The Usos and SAnitY in a Triple Threat Tag Team Match to determine The Bar’s opponents. In the closing moments, Eric Young illegally placed his feet on the ropes while attempting to pin Rusev, but English broke up the fall from the outside of the ring, and “The Super Athlete” blasted the SAnitY leader with a Machka Kick for the 1-2-3.

Sheamus and Cesaro beat Luke Gallows, Karl Anderson and The Colons in a Triple Threat Tag Team Match last week. The winner of The Bar vs. Rusev Day will challenge The New Day for the SmackDown Tag Team Championship at WWE Hell in a Cell on September 16.

– The New Year’s Eve episode of Raw will be taped on Friday, December 28 in Detroit, Michigan at Little Caesars Arena.