Did Brie Bella Get Backstage Heat For Injuring Liv Morgan On Raw? - PWPIX.net

Did Brie Bella Get Backstage Heat For Injuring Liv Morgan On Raw? 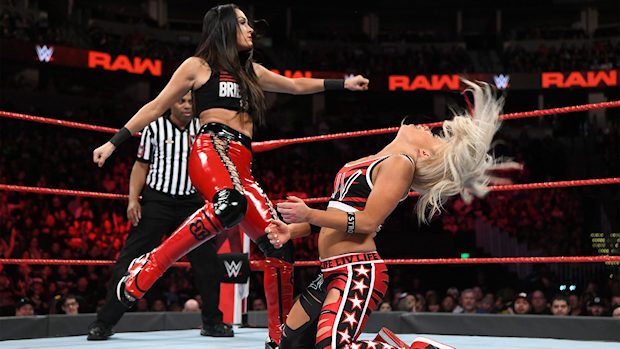 As confirmed by WWE earlier this week, Liv Morgan suffered a legitimate concussion after being kicked flush in the face by Brie Bella on Raw during a Six-Woman Tag Team Match pitting The Bella Twins and Natalya against The Riott Squad. Morgan is out of action indefinitely since she needs to passe the WWE & ImPACT Concussion Management Program and there is no way to estimate a time frame for that.

According to Fightful.com, there are no lingering issues between Bella and Morgan, but this might not be the case with Ruby Riott and Sarah Logan.

Per the write-up, Brie apologized to Liv several times after the incident. There doesn’t seem to be any bad blood between the two, but Logan and Riott “looked to be unhappy” after the match since both are extremely close with their Riott Squad stablemate.

Morgan remained at ringside throughout the match, with WWE Senior Ringside Physician Dr. Chris Amann tending to her while the remaining participants worked to a conclusion. Logan and Riott checked on her immediately, and Liv apparently had trouble recalling what happened, with Fightful describing her as being “on auto-pilot” after absorbing the kicks.

To add to this, we heard that there was not a lot of heat on Brie backstage for injuring Morgan. It was seen as an unfortunate accident.

After injuring Morgan, there was a spot where Brie was to be catapulted into a forearm from Riott, but ended up nailing her in the mouth instead (as seen below).

The other Brie Bella botch from that (disaster) match#RAW pic.twitter.com/kxox9V77sx

Brie actually got more heat for this since Riott got legitimately upset. Riott, however, quickly got over it, so it shouldn’t be a lingering issue.