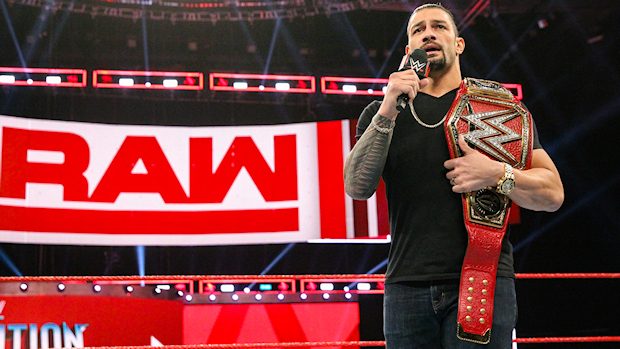 – One week after relinquishing the Universal Championship, Roman Reigns was backstage at Raw last night in Charlotte, North Carolina.

According to Raj Giri of WrestlingInc.com, Reigns left the Spectrum Center about an hour before Raw started. Giri doesn’t know why Reigns was backstage.

In the opening moments of Raw last week, Reigns announced that he has been living with leukemia for 11 years and the disease’s return would force him to relinquish the Universal Championship and take a leave of absence from WWE. Raw last night kicked off with this video package of Reigns’ emotional announcement (it also aired on SmackDown LIVE last week).

– Just three days before WWE Crown Jewel, the SmackDown LIVE Superstars set to compete in the eight-man WWE World Cup will pair up and square off in a massive tag team match.

WWE has announced that Rey Mysterio and Jeff Hardy will team up against Randy Orton and The Miz.

Vince McMahon took to Twitter to wish “The Rated-R Superstar” a happy birthday.

Happy birthday to @EdgeRatedR, a #WWE Hall of Famer who always knew how to make an entrance. pic.twitter.com/zUzByapJeU

Who is Roman Reigns wife?