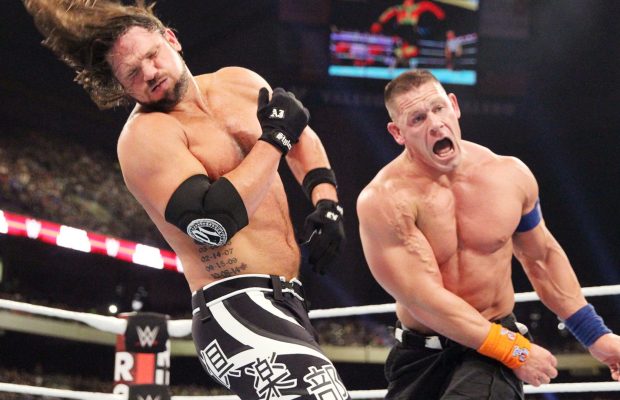 – John Cena is teaming up with movie star Jackie Chan in an upcoming action film, according to The Hollywood Reporter.

Per the report, Project X is a working title, and “the movie centers on a Chinese private security contractor (Chan) who is called in to extract the oil workers when a China-run oil refinery in the Middle East is attacked. When he learns that the attackers’ real plan is to steal a fortune in oil, he teams up with an American — a former Marine played by John Cena—to stop them.”

The movie will be directed by Scott Waugh, who served as the director for the 2014 film Need to Speed.

Cena is fast carving himself a niche in the action movie genre. He has upcoming roles in the Transformers’ spinoff Bumblebee and The Jason Directive, and previously appeared in movies like Trainwreck, Daddy’s Home and Daddy’s Home 2, among others.

– After tapping out to the Asuka Lock during the 10-Woman Tag Team Match on SmackDown LIVE, “The Princess of Staten Island” says she was at a disadvantage and is more than prepared for “The Empress of Tomorrow” at WWE Money in the Bank this Sunday.

– Here is footage of Charlotte Flair on the red carpet at WWE’s first-ever For Your Consideration event for the Television Academy, held at the Saban Media Center in North Hollywood, California last week.

Related ItemsAsuka NewsCarmella NewsJohn Cena NewsMoney in the Bank News
← Previous Story SmackDown Match Moved to the WWE Money In the Bank Pre-show, Updated Card
Next Story → Paige Says Her Things Were Stolen At Hotel, Rusev Is Ready For Money in the Bank, Top 10 Raw Moments